In the previous post I am jamming out the text for my FGU's original Space Opera setting and last night I sketched out the ships which the Merchant Masters use to travel between the three remaining systems of humanity; Spica, Tharon and Sardis.

All in-system, sub-light starship designs are available, and the TISA Maneuver Drive is in common use. It will not possess defensive armaments or armor but may have shields to protect the ship from fast moving debris. Of course, if PCs want to try and get a ship with defensive armaments and battle armor they should be allowed to try. Building an armed starship would be a dramatic adventure arc in itself filled with all sorts of dangers and excitement. 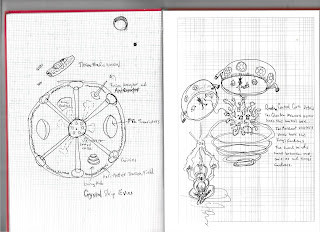 Ships with FTL capabilities are the province of the Merchant Masters and these ships are designed around schematics drawn up two thousand years ago by the first Quantum Weavers after their contact with the Taakar. More correctly, after their contact with the Taakar they became the first Quantum Weavers who were capable of building what they had been given.

These ships are shaped like globes consisting of clear, facetted crystal. They are the size of a small asteroid, 21 miles in diameter. They are not affected by gravity wells, and they are 21 times faster than terrestrial jump ships. A ship rated at a 21Warp factor will travel 21 LY in 24 hours. The ships made from the knowledge of the Taakar travel this same distance in an hour. They do not appear to have sub-light capability, the Crystal Ships appear in orbit of their destination, a systems’ Primary. From this orbit the sub-light ships of the system approach to receive the goods the Merchant Masters have delivered. Cavities appear on the surface of the Crystal Ships which become the berths for the terrestrial ships. Goods are then marshaled into their holds by crew in contra-grav harness under the watchful eyes of a Sword-Mind. If there is to be a meeting between leaders, they will be received within the halls of the Crystal Ships. The Merchant Masters only leave the Crystal Ships when home, on Spica, the seat of their power under the unblinking flame of the Taakar. These transits are completed in sparkling sub-light ships which have been built to the Quantum Weaver’s specifications.

The Crystal Ships have no apparent weapons, why would they need such things? No screens or EW/ECM energy have ever been detected from the Crystal Ships.