My first opportunity to roleplay in my own campaign world happened. Even Heroes Bleed had an alternate Game Master, one of the other players, this past Sunday and I was able to run an NPC Hero I created. Sitting on the other side was an incredible treat to see how the city smelt from the perspective of one. 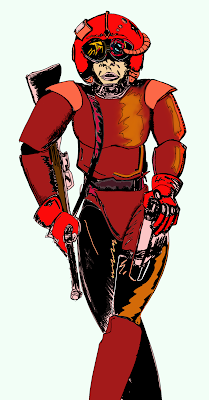 First "fact" of interest was campaign date. This adventure is occurring a month in the future from the current game action. This means the facts we established during the session are now future facts, events which will occur. My next thought of intrigue was how easy it was to become part of the player group. Makes sense, I've grown to know these characters right along side their players. Same with my PCs roleplay. I created the character and they have fought on the streets of Capitol City already.

It also triggered some cool ideas for the current adventure I am running back in "real" world Capitol City circa May 2020. The entirety of the campaign's length is 7 days. A half a year of game play and we have advanced through seven days of activity. And what a busy seven days it has been! There is a record of history on each character which has so far appeared in the game, including the other Player Characters. This made for a deeper connection between my Player Character and the others. Ultra Rosa (my PC Hero) has formed opinions on her co-workers already and has had a chance to respond in kind.

Last but not least, I got to "not know" what I was going to do because I was not in charge of pace. I could increase pace of action by having my PC do increasingly extreme actions in the game world right then. But overall, if the Referee says it is tomorrow, well, it is tomorrow gosh darn it! This type of control over pace is not something the players get to dictate as much as the Referee does.

I have two more sessions (more or less) before this adventure will conclude and I am back in charge of the who, what, where of Capitol City and I intend to use Ultra-Rosa's guns before then. Before I have to release her back to the game world I want to see her light some shit up! 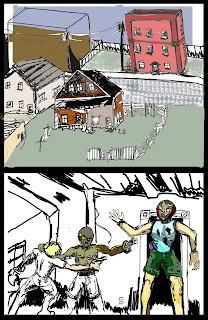 Long and short of it, I am sold on mixing up the game master work with the other players at the table. I don't know if any of the other Players wish to referee a game session, but I hope so. I think it is fostering greater and greater investment in the game world by everyone at the table.