Well, it's not really mine, I just play in it.

I took the plunge a year ago to participate in a Google+ campaign based in Geoff Mackinney's Carcosa  setting to play a Sword & Planet game. The non-medieval geometry inherent to the Carcosan world at least guaranteed I would not be interacting with the usual drunken dwarves, bored innkeepers or goblin infested slime coated tunnels which I had hacked my way through since high school.

I hoped the alien environment would force me to approach my play different. What good is gold on a landscape absent of society, safe water, and food?

I hoped it would interest me.

I was curious how OSR rules would handle this kind of setting and I was anxious to try out one of these new retro-clone systems which seemed to be firing the engines of these online gaming opportunities.

As far as the Carcosa game material being offered by the DM through the setting book, this has been great. While bandits and wolves in the woods and along the trails of your average feudal realm can put me to sleep, I seem to really perk up and pay attention when my PC is a half naked savage ducking terrifying dinosaurs, and storm cloud sized amoebas trying to traverse the naked plain or navigate fern choked swamps. The game world makes me feel more threatened due to my lack of familiar reference. How much of the game material we adventure through is from the world book, what is created by the DM and what is hacked from other published sources I don't know. The DM is the one who knows that. But I can say I do feel like I am in a savage alien world racked by terrible powers beyond my PC's comprehension. Once again, mere survival feels like a tremendous victory day in and day out.

Resource management. From torches to ray guns, where to acquire these different resources which increase my chances of survivable can be very difficult to lay your hands on let alone use correctly. Everyone knows how to use a +1 sword, magic wand or a rare and valuable gem, or at least give it a relative game world value. Buzzing robot insect halo surrounding a glowing pylon? Hard to tell what it represents or offers. Once again, pushing me to be more imaginative in my game play than I might have.

This also applies to experience points. Treasure is rare. Items of wondrous power are hard to find. They are either already possessed by some bad ass, or are difficult to access. Mineral wealth is also hard to dispose of. Old Ones are hard to buy off. It forces me to create a different metric for success each game play beyond resource stock piling. I can't just loot my way to a flying squadron of Carcosan's mounted on telepathic bats equipped with stereo speakers blaring Zepplin and shooting lazer beams out of their eyes. I'm going to have to do some work.

Social interaction. It becomes more of a challenge to interact with NPC's when traditional motivations may not apply. What does a spawn of Fasha really want and what does that have to do with me? All good game elements which will encourage me to stretch my imagination a little bit further again.

These elements all conspire (and more I'm not recognizing right now I'm sure) to make me place my individual game session play as infinately more valuable than the accumulation of abstracted experience points and "leveling up". 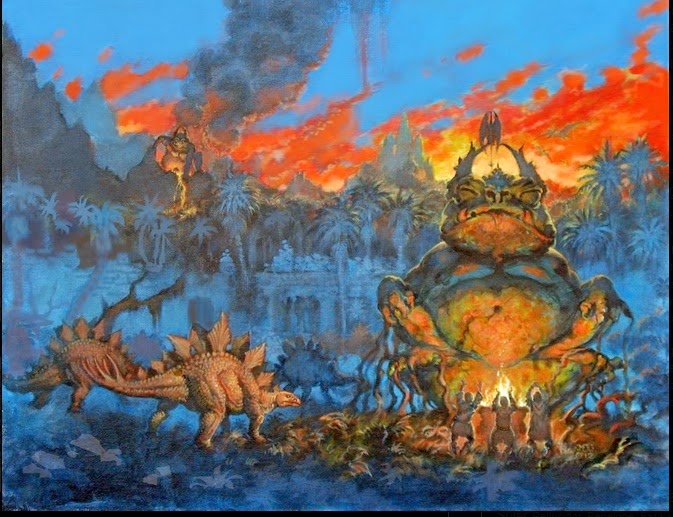