The Health of Gaming Today 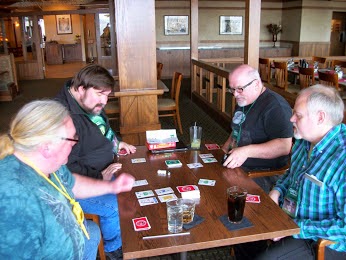 Looks pretty grim. Over the last five or so years it seems eulogies to another giant of the industry who has just past away. Dave Trampier, Aaron Aalston, Tom Moldvay, Gary of course, etc. I didn't think much of it at first. Unfortunately we all must grow old and die. But then I see a picture like this;

and, you know, the fact that these lovely human beings, these creators, our grandfathers so to speak are falling at the young ages of their sixties, their fifties hit me. And it is easy to see why. The overall health of the folks which created our beloved sport are terribly unhealthy. Liquor, cigarettes, lousy diet, zero exercise.

Obviously the game in which we love is sedentary, four to six hours at a time sitting around rolling dice does not break a sweat. And you throw in all the above listed "activities" which one finds lovingly practice along with the role play chatter and you end up with nineteen forties era heart attack rates, diabetes, cancer. Sheeeet.

The turn around is, of course, quite simple; improving diet and making time for exercise. The consequences of not doing so are dire as the parade of creators to an early grave give their mute testimony. The health consequences of just sitting too long are amply illustrated in this Washington Post article dated January of 2014.