We have both types of Solo Role-Play; Fantasy & Science Fiction

I recently played solo rpg-ing with two rules-lite products from the DIY gaming community. These being Sword & Backpack and In the Light of a Ghost Star. S&B is obviously a fantasy game, questing for treasure and such, while ItLoaGS is a science fiction game where players deep-dive a ruined Earth for ancient artifacts. The author of ItItLoaGS also sent me a free short fantasy adventure model, Holt of the Elk Lord, but first up is the sci-fi horror adventure.

ItItLoaGS Random Solo Surface Patrol – Collect what you can, load it up on the lander and return to orbit. I create a Science orientated PC named Dr. Drazz. Red Shirt #1 and Red Shirt #2 are assigned to me. They will provide protection on the nightmare surface of old Earth.

First roll is to determine my touchdown location. The elctro-static atmosphere is home to violent ammonia storms. Your landing is much determined by conditions than a planned route. It comes up A1, up in the mountains in the far north west. How a landing goes will be left to a toss of the dice. 2D6 will be used. Much like a D&D Reaction Roll or a Traveller Saving Throw, the spread of outcomes should be familiar. Target numbers 8 or higher are what usually counts as success. The toss is a 3! Catastrophic conditions! The lander is thrown against the stoney peaks and comes to rest. Time to assess the damage. I pull out my Space Opera rule book and roll on the starship battle damage table. Since it is a catastrophic failure I decide three tosses on the table are required; all come up Armor Belt Penetration. The lander can’t enter orbit unless the hull is patched first. 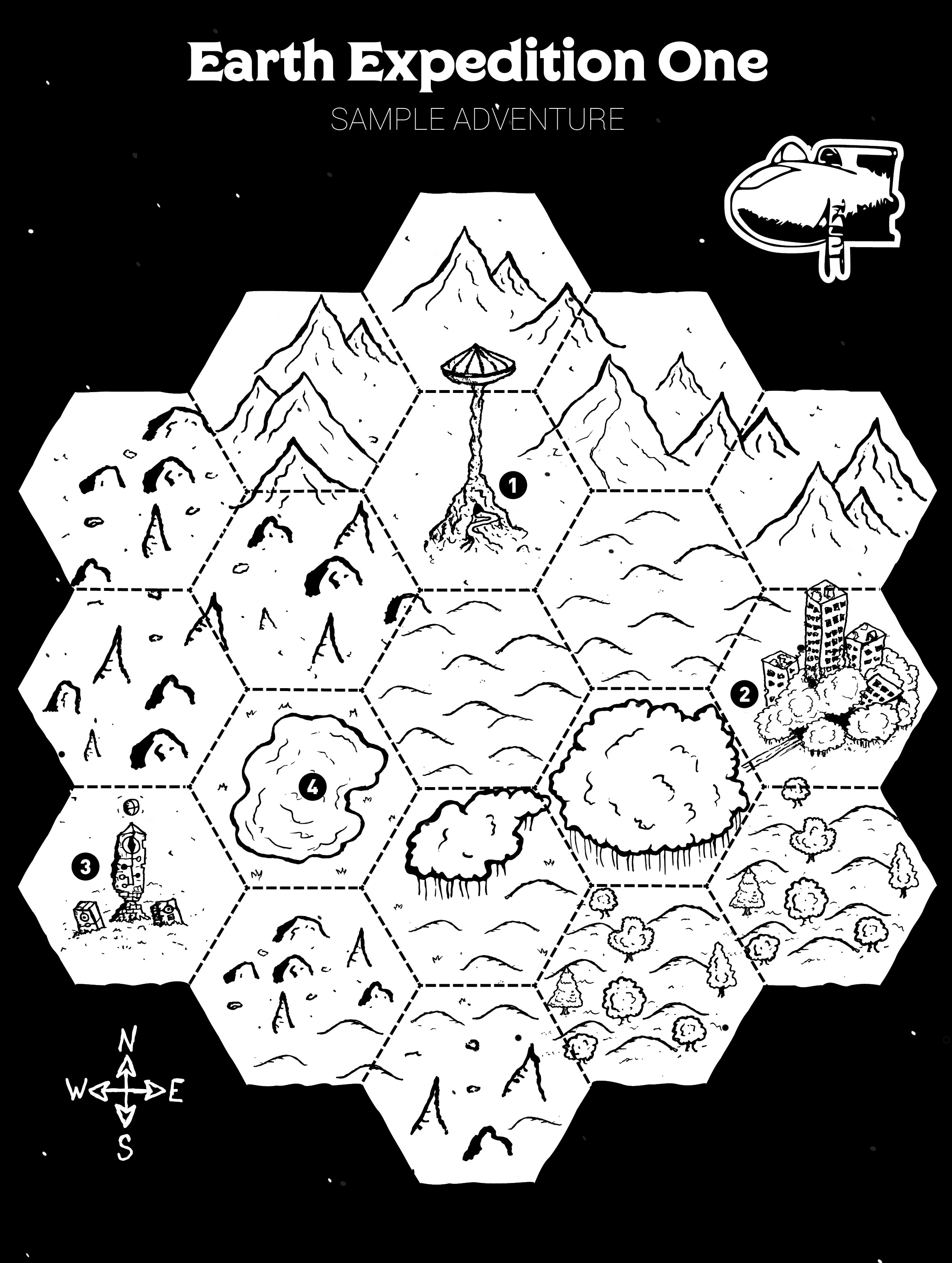 Relying on our surface hex map my Party has a choice between exploring an ancient idol surrounded by crumbling temples or a mysterious tower occupied by an Astro-Lich. The tower is more likely to have the technology we need to fix the lander. Maybe even something valuable to bring back. I order the team down the steep slopes and we head west. We are quickly out of the difficult mountains and cross a more hilly land. No monstrous danger is to be found and I quickly find out why. Hard radiation zone! I use an Arcanum Syndicate product; “Sci-Fi Random Encounter Tables” written by Brandon Williams, to generate this result. I resolved with standard ItLotGS’s 4+ for success to determine if any of us are sickened. The Red Shirts survive, their light and heavy armor making the difference. Dr. Drazz is not so lucky. Lost by 1. He is carrying a Cell-Patcher. I throw against a Science attribute of d8 and succeed in rendering a radiation remedy post-haste! I will not be able to use this device’s healing abilities for twelve hours now as it recharges.

The tower of the Astro-Lich turns out to be a sophisticated space ship under construction. It must be close to completion. Engines can be seen test-firing. A horrid screech and wail sounds from the top of the ship where smokey tendrils swirl about. Undaunted I order the Red Shirts forward, blasters ready. Near the base we walk around building equipment, pump-tubes reaching from ship to ground. Automated spider-borgs scamper hither and tither. Going into stealth mode we begin scavenging in the temporary warehouses and buildings. We strike pay dirt quickly. A throw on a Mothership Dead Planet table yields a functional life support system! We get this back to the lander and no need to patch the hull. This high tech equipment will keep my crew alive till rendezvous. Going to be difficult to bring it back. We need some way to transport it. Two security guards roll up on us and a gunfight ensues! Red Shirt #1 disintegrates the first mook with a Heavy Blaster while Red Shirt #2 lays down some “suppressing fire” with lighter weapon. The second guard dives for cover and runs away.

We load the land rover up and split. With the proper radiation antidote we are safe from the waves of purple gamma streaking across green-stained sky. Before the lander is reached another party of scavengers is encountered. We all nervously finger our holsters and ask how things are going. Long and short; they agree to help get the life support system back to the lander if we would team up and assault the tower/ship for more artifacts. Reaching the crippled lander marked my stopping point for ItLotGS.

Sword & Backpack was well matched with Nate Treme’s short sandbox adventure The
Primeval Holt of the Elk Lord. I wish I took notes on all the different ways I house-ruled success chances, but NPC encounters really set the tone of play. I had no interest in consorting with the rubes found in Grimholt so Mendalzane the Wizard plunged into the shunned Sleeping Forest in search of the Elk Lord.

Like the sci-fi game described above, Sword & Backpack, Justa Guy With an Axe Edition, is rules-lite with only a thin scaffolding of mechanics. I’m finding it makes the idea of actually solo-rpg’ing appealing. Challenging my DM skills of creativity on the fly is the point, not tactical, crunchy resolution mechanics.

A S&B character is defined by one of three jobs; the fighter, the wizard, and the rogue. Pick your name and give yourself a weapon, wallah! You are done. All adventures resolve actions by rolling a d20. If it is something related to your “job” then add a +5. The difficulty number you must meet or exceed is set by the StoryTeller (the ST). While each of the three jobs has their own specialties, there are no “class” restrictions. You want your Wizard to swing a sword, then start swinging! Your Mercenary Reaver wants to summon demons, get out your chalk and candles! The point is, if you can fit the task within the scope of your job the ST will give you a +5 on the roll.

Fighting is abstracted by opponents throwing contested rolls for the attack and defense. High roll wins. Hitting your opponent deals a wound. Losing the roll is a miss. D20 for initiative of course and then make shit up. The driving action here is; what random tables should I use for this. This being whatever I’m up to at the moment. Cross-country travel requires a Wisdom check to not get lost. S&B does not have any attributes so a Difficulty number is set and the +5 argued for. Mendelzane succeeds in not getting lost and arrives at The Pond. Mechin, an ancient, sentient, giant goldfish calls The Pond home and Mendelzane wants to enhance his Elemental Magic. I forgot what I did to instigate a Reaction Roll, but the Wizard succeeded and was allowed to drink from the enchanted pool with a Blessing +1 on any defensive roll being the result.

With the blessing of the fish, Mendelzane decides it is time to seek Ziphek the Elk Lord and petition for favor. The journey is uneventful and my Elemental Wizard arrives at the petrified trunk which is the throne room of Ziphek. Nate was clever enough to detail the Ziphek’s with “Members of the Court”. We know the Elk Lord dislikes humans, but I’m walking in with the fish-god’s blessing. Let us see how this goes. Fimbault, a badger ends up being the gatekeeper to Mendelzane. The Reaction Roll is inconclusive. The badger will not allow entrance unless Mendelzane performs a service to the Elk Lord. Melmoon, a crazed hermit, occupies the Ruined Fort on the other side of the forest. Fimbault suggests that running this madman out of the forest might sway the court to except an audience.

More and more random tables were pulled willy-nilly as Mendelzane navigated the forest, battled the hermit and acquired a traveling companion; a Grimholt merchant with a kingly gift. Now he only needs a king to present it to. Assuring the merchant that the Wizard could easily introduce him to the Elk Lord, the two headed back through the forest. And promptly got lost. Here is where, with random tables, I derive the most pleasure of solo-rpg’ing (yes I am a seasoned pro by now). Finding out what a new encounter actually is. Before the dice are dropped, my party of two may have to confront any number of problems which could overwhelm them. What will it be, what will it be?

It appeared we had traveled to an unknown and foreboding valley, sharply defined, with a dark, silent lake laying placid before them. Further along the shore where the hills crowded in a ruined temple perched. “This is a place of death my friend,” Mendelzane spoke. “I would know what evil once stirred here, perhaps those ruins may yield a clue?” Surprisingly (or luckily, it is a dice roll) the Merchant finds some steel and agrees to search the foreboding haunt. Nothing is revealed, in treasure or knowledge, so we head out to find our way back to the Elk Lord and his court. But it is not to be! A creature from the black depths arises; a Shambling Mound!

“Flee as fast you can friend!” I cried. “This demon is more than a match for us!” I push the merchant up the hill, but his feet need no assistance. Pulling the mule cart up the hill I could see the Shambling Mound would overtake us if something wasn’t done. Mendelzane throws all his magic at the beast. The wildly unpredictable Fireball and the irresistible Waterfall spell. Scorched and washed back into the lake we reach the valley’s ridge and disappear into the forest.

Court goes well, what with the merchant presenting a magnificent gift and I detailing the successful rousting of the hermit, we were promptly knighted as Grimholt Guards. This will provide us with a +3 on reaction rolls with allies of the Elk Lord.

In closing, I find a solo rpg session a pleasant late night activity with the payoff coming from seeing stories unfold from a dynamic environment. It may strip some of the wonder from the game, seeing my particular method of creating laid bare before me, a dispassionate view of the ugly sausage-making for immersion. I am sure Dr. Drazz and the wizard Mendalzane will be face with more random trials to come!