was recognized at my local library, and it is not anything I would have given a second look. Truly it is an event for young kids and not a grizzled old grognard like myself. Cold pumping a session to strangers, kids no less, is not the game experience I'm looking for. But I ran a game of D&D 5e this afternoon nonetheless, with a bunch of kids and it was a great success.

About a month ago a gentleman contacted me through a game forum looking for someone to play D&D with his son. I responded that I was an adult and his son would need to get a game group started with his peers. A few more emails went back and forth between us and that was precisely the issue at hand. His son hadn't been able to get his friends to want to play. I sympathized. I informed good old dad that I had spent some time over the years trying to get a local game group together myself and our mountain town just didn't harbor folks with the interest. Aspen is all about the super athletic, the super rich, and those chasing the super rich. I could only wish his son luck and encouraged the two of them to keep on trying. Once he got his friends to play a session he would have no trouble continuing play.

Then a couple of weeks later I saw the library advertising International Game Day and I new what I needed to do. I got permission to run D&D at the event. I emailed the dad and said I would be running a game at this public event for kids and we should have a go of it. The hopes were, of course, whatever local kids joined in would be the kernel of a game group the kids would continue on their own.

Well the young tike padded the playing field and he got four of his friends to come along. This new player was going to make a fine DM, I thought. He has gone to great lengths to pursue his ambitions. I was also immensely pleased to see a girl was part of the group. He had a Monk, the rest of the group I handed out pregens. I brought B2 The Keep on the Borderlands. It worked for me when I was eleven. Why mess with success? I had my B2 conversion guide for 5e and there was a 5e Player's Handbook and Monster Manual available so I had all the tools I needed to drive this candy caffeinated train down the tracks for the next three hours. They went into the forest, they went into the swamp. Eventually they pushed forward on the main plot hook which brought them to the Caves of Chaos. Death saves were made, critical hits were scored, the shouting and disorganization mushroomed. It was awesome.

*Bonus points for Jay; near the end of the session a couple showed up. They have been living in the area for a year and had not found anyone who games. They were desperate enough for some D&D they had to take a chance, so I made some new contacts!
Posted by Jay Murphy at 11/19/2016 No comments:

Bighara over at Zarth Tourist Bureau has given a very accurate review of my USR Sword & Sorcery game as well as the additional introductory adventure module Shrine of the Keepers.

The system is definitely begging for a magic and monsters supplement so I will have to reread all my Conan novels and start writing as if the hounds of hell were on my heels! 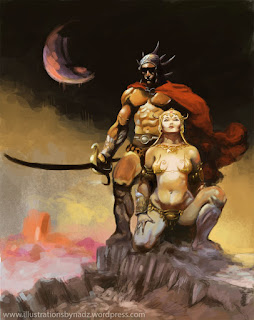 I have just uploaded my latest conversion guide of 1e D&D modules for 5e rules to DMsGuild.

EX1 Dungeonland is chock full of special creatures and unique NPC's so I think any Dungeon Master will get their dollars worth with this particular conversion guide.

Please note that the Classic Modules Today products are not the original module. You need a copy of the original 1e adventure module to use these conversion guides. 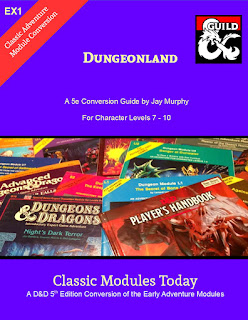 This is my fifth guide completed and I've adjusted Challenge Ratings and XP awards to reflect the ramped up level progression found in 5e. In an attempt to mimic the old-school flavor of 1e characters will not provide as much XP as straight treasure.

My conversion guide for B2 The Keep on the Borderlands is the first one I did and needs a major overhaul to reflect my inclinations on XP awards. It also needs a major overhaul on "Spell Conversion Notes" and "Magic Item Conversion Notes". If you have already purchased this particular guide look for the 2.00 version going up Monday morning.
Posted by Jay Murphy at 11/05/2016 No comments: