Another foray into the world of Sword & Sorcery

The Hunter, Blacksmith, and Man-Servant were joined by a hard scrabble Farmer of the Zorab mountains to try and finish off exploring the tomb of Rakoss the Undying. 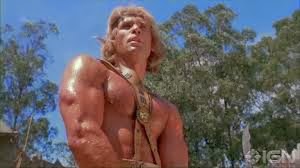 First they had to try and heal up from their current wounds which put them short of rations to last the week. If there is one condition which cannot be overlooked in the gritty world of Sword and Sorcery is where your food, wine, and water is to come from. The heroes of pulp literature were always on the edge of thirst from trekking across endless wastes, or being nailed to a tree, or left to rot in some subterranean dungeon.

With the hills teeming with degenerate hill-men a confrontation is most assured. As far as game to be had, well, the party does consist of a hunter so bagging a mountain goat was assured also. The hunter and the farmer survived their encounter with the three hill-men on the narrow mountain trail and returned to their encampment with meat enough to last a many day.

The tomb itself was clear of overtly malignant forces outside of acid dripping giant ants. The Farmer had purchased a jar of honey during his initial character creation, and he was wise enough to use it in a simple plan to neutralize the animal threat. Unfortunately once again an encounter with the ants left a party member grievously wounded. In this instance, the Blacksmith. Undeterred they proceeded to loot the sarcophagi found in what appeared to be the final resting place of Rakoss, and his lieutenants. The players may have been surprised the mummified remains did not rise to choke the life out of those who defiled them, but they stuffed their bags with their loot, and made all speed back to the city of Dipur.

Concluding their business with Avant the Failed, the party searched out a merchant who would be interested in gems and jewelry from a long dead necromancer. An exchange which Avant warned them to be careful about. The Grand Inquisitor's men would look dimly on items tainted with dark history to be openly traded in the markets of Dipur. But of course such a merchant was found, and after trading the smaller trinkets for more gold then they had ever seen the party revealed the most mysterious object in their possession. This was an artifact of significant blasphemous origins. So much so that the merchant refused to trade with the party then and there. No, the transaction must be concluded in utmost secrecy, discrete arrangements must surely be made. The merchant assured the party he would call for them in a few days time when all such arrangements had been secured.

This left the party free to commence a classic debauch, and banter about future tasks and adventures in which they could involve themselves. The Blacksmith desired to purchase his trade shop back from the corrupt tax collector, while the Farmer mused about assembling a mercenary force or perhaps purchasing a high commission with the Grand Inquisitor's guards. The Hunter, well, he was satisfied with endless wine, wenches, and joints of meat. I decided this traditional approach was well worth an immediate health bump for they all still had wounds from their previous adventure.

I was also determined to start applying the pace of sword and sorcery adventure. The simple elements which keep the players on the go. When it came time to pay for the nights romp in the wine shop one of the player's fat coin purse came up empty. The swarthy gentleman who had purloined it was sauntering out the door pleased with his luck. Of course the players had to pursue. Of course they were to lose the thief in the twisted warrens of the cities slums, and of course horrible screams would lead them to the thief, now dead and absent the fat money purse. A passing sergeant of the guard advised the party to consider the money as good as gone for it was obvious mad cultists had done the poor wretch in. They were in front of the Shrine of the Seekers, and the open gate before them told the tale plainly to the drunken sergeant. Leave it be he spoke once again as he hurried on to safer parts of the city. 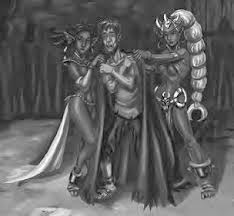 While the Farmer and the Blacksmith debated the wisdom of penetrating the evil shrine in the dead of night, the Hunter was obviously wise to the cannon and declared his intent to win back his gold, and win it before the morning sun gilded the spires of the Grand Inquisitor's city! So onward and inward they went...
Posted by Jay Murphy at 12/17/2013 No comments: 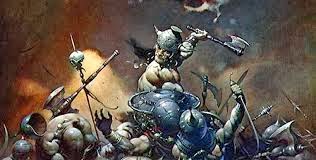 I DM'ed my second game in over twenty years via Google+ Hangouts. It was a Sword & Sorcery game using Scott Malthouse's USR rpg rules. True to all rules-lite systems, the DM is required to embellish the sparse rules with the flavor of the genre you wish to play. For my game I modified character creation by limiting players to human characters. They cannot start with magic capabilities, though this may be acquired through game play. Random rolls on a background table are also required, but the players are free to choose the arrangement of their attribute dice, and their three specialisms. My two players ended up with a Hunter/Hunting Site, and Craftsman(Blacksmith)/Poverty. I encourage the players to embellish these sketchy details, and come up for a reason they find themselves together in the desert city of Dipur mingling with the wine sellers, lotus peddlers, dancing girls, and thieves which are found in the busy South Bazaar. To explain the Blacksmith's poverty the player stated he once had a blacksmith shop in the city, but his competitor had run him out of business by bribing the tax collector to close him down. The Hunter was coming from his prized hunting site in the Zorab mountains with a mountain lion skin to trade for silver. The Blacksmith is a friend who he usually visits to have his hand axes sharpened.

The story hook revolved around a cairn the Hunter had discovered near his hunting site. Wrought with undecipherable glyphs, the Hunter hopes the Blacksmith knows someone in the city who could explain these strange signs. Of course a city dweller such as the Blacksmith would know that Avant the Failed, an aged scholar, might be able to shed light on such archaic symbols. Another story hook I floated was that the Game Master of the gladiator arenas was paying a princeley sum for exotic animals from the "Spires" found northwest of the city deep in the unholy Ash Plains. I was prepared to pepper the group with other prepared rumors, and story hooks if they spent more time in the city, but they were happy with the scholar's grim tale of Rakoss the Undying, and his supposed tomb sealed and forgotten in the Zorab Mts. Could this cairn with the long ago defeated necromantic lord's symbol indicate the location of this tomb? The aged scholar was most anxious to confirm such a discovery. Such a historical discovery would revive his dim reputation among his peers. The party negotiates for additional muscle, some expedition supplies, and strike a deal; treasure and loot for the players, relics which prove the place is the last resting place of Rakoss for the scholar.

In the morning the party heads due east towards the towering mountains with Gomar the man-servant, and a compliant donkey loaded with supplies in tow. The trek is not uneventful. A wandering monster check brings the degenerate hill men of Zorab down upon them in the night. Since this is the first combat I had run in a dogs age I only sent three of these desperate savages at them. The man-servant was grievously wounded while the ax wielding Hunter chopped all in front of him down. He chased down the last fleeing hill man, and split his skull with ease. In the morning the small group pushes on to the Hunter's prized hunting site to rest, and heal.

Inspection of the weird cairn by Avant's man-servant suggests that the writings are a warning, and indicate the location of the tomb is due east against the towering walls of the mountains a short distance away. After hours of exploration the Hunter locates a narrow ravine which opens up into a large chamber, and behold, at the end of the chamber is a large sturdy door! While the door is locked with no visible means of opening it does help to have a Blacksmith, and a donkey in your group. It takes some time, but the group is able to pry the door open enough to slide on in.

So far the party has survived the initial horrors found within, but they have just scratched the surface. What terrors lay withing the unexplored chambers, well, we shall see!
Posted by Jay Murphy at 12/10/2013 No comments: 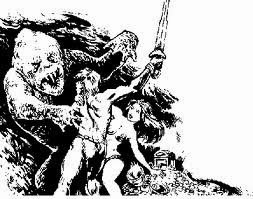 The common coin of the realm is silver, and following equipment list costs are in silver. 10 silver pieces make for one gold. Copper is the lowest coin, needing ten of these beggar chips to make one silver. Copper is usually only good for buying moldy bread, and cheap clothing. The sourest of wines can be had for a few copper, but only slaves would be found drinking such foul fare.

Gems are the most concentrated form of wealth, ranging in value from 100 to 1,000 gp’s and up! Most cutthroats would sell their soul for a chance to steal but a few gems.

Player characters start with basic equipment relative to their character backgrounds, and therefore get to list three such items for free. They also get to roll 3d6x20 starting silver to purchase some additional gear. Remember to keep some silver on your person to by that first nights round of ale, and mutton.

Rules for the game using Scott Malthouse's USR mechanics can be found here!

Mundane gear can be bought using the same prices in the Dungeons and Dragons Player’s Handbook. Keep in mind that most of the prices there are listed in gold coins, so multiply the cost by ten to determine the price in silver!
Posted by Jay Murphy at 12/07/2013 No comments: