2. What was the first character you played in an RPG other than D&D?

...and how was playing it different from playing a D&D character?

Again I have to go with Gamma World here. While the gaming community of northern New Hampshire was dominated with TSR products as best as I can recall, this was the only game I was immediately aware of which got me out of what was becoming a repetitive exercise of dungeon delves with no connected world to belong to. 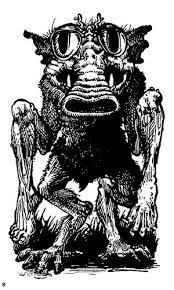 Being a player, except in a game of D&D, was extremely rare for me as well. If there was a game I wanted to play I was going to have to be the Game Master, or it wasn't going to happen. No, I take that back. My best friend Randy was buying other TSR products; Gangbusters and Top Secret come to mind, but they didn't take off with anyone like D&D and Gamma World.

So I ended up with my first non D&D character being a lithe lad with mental control, and distended jaws like a python from a run down village in my friend Randy's campaign world. A group of Gamma World characters are a wild card bunch of strange powers and disadvantages and for me made me try and think of effective ways to make the character and the group work effectively together. Again, at fifteen years old this was not too sophisticated a program. Mostly it was based on starting with more hit points at first level than any of my long surviving D&D characters ever achieved! Therefore getting into conflict and combat with the unknown was done with complete abandone without much thought to long term planning. But a blast on two liters of Mountain Dew anyways.
Posted by Jay Murphy at 3/09/2014 No comments:
Email ThisBlogThis!Share to TwitterShare to FacebookShare to Pinterest
Labels: Sci-Fi

1. What was the first role-playing game other than D&D you played? Was it before or after you had played D&D?

Gamma World! The cover of the first edition from TSR just sucked me in. The weird, evocative aftermath setting just set my brain on fire! 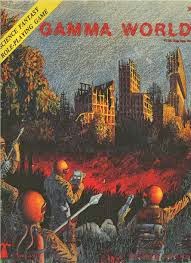 Since until then my gaming had been restricted to dungeon delves, the cover was really my first indication role play gaming could involve an "outside" world. What terrible battles could be fought on the bombed out towers thirty floors up?! How do you navigate a landscape engulfed in flames and radiation. Here was a rules set which could let me create the same adventures which thrilled me like the Kamandi comics found at the local barber shop. Charlie the Barber was one smart business man:)
Posted by Jay Murphy at 3/01/2014 No comments:
Email ThisBlogThis!Share to TwitterShare to FacebookShare to Pinterest
Labels: OSR, Sci-Fi
Newer Posts Older Posts Home
Subscribe to: Posts (Atom)