It is not completely solid, but all indications are I will be attending Ghengiscon this February in Denver. Over Valentine’s Day no less. Most likely the only convention I go to all year (lets hope not). The price to be paid for this running on Valentine's Day I imagine a few grumps and grumbles in the cabin.

The two games I offered have been accepted so I will be running FGU’s Space Opera on Friday and Saturday run my current OSR release, an adventure module for PCs 2-4.
Space Opera needs prep while AA03 not really. For the OSR adventure I hope participants bring their own characters. Put some real money in the game. No one is going to do that though. Players are cautious, paranoid lot. I have been twisting up layout machine to make an original, comprehensible character sheet for SO and is working out well. Unless you are willing to draw one up,like James V. West, I find software creation to be clunky and hard to fine tune. Fortunately sci-fi character sheets lend themselves to structured layouts, clean text and picture frames.

Character sheets and monster stats! The adventure takes place in a hostile jungle so a variety of critters to encounter should be drawn up into its own monster section. Like an appendix or “New Monster” section you can find in traditional modules. Having a few pages with all the monsters to be encountered in the adventure, with stats, is a must for me when writing dungeons. Detailing and tricking out the flying ATV which will be used in the adventure. In a one-shot adventure players don’t have much to hang their hat on, so useful items and gear begin to define their capabilities. Having depth to the information about the rig will help the players come up with ways to use it and escape danger!

Traversing the canopy below by flying is hazardous, there are large raptors which are attracted to anything they can see in the sky. Having your Air Raft break down deep in the jungle is when you need to call for a lift, and fast. Once I have something worth playing at when the PCs arrive at the “Forbidden City” the rest of the content will be much easier to write.

I’m not sure what kind of presence RPG’s have at Ghengiscon, but I know Savage Worlds is played more than any other thing, followed next by 5e? I think.
There are some luminaries of the OSR-o-Sphere living on the front range so there is always the chance I see someone I’m a fan of. Toughest thing about the con is the drive over the continental divide. It is always a crap shoot. There is no guarantee you  will get where you are going once your on I-70 in the high country.

Silver Best Seller is USR Sword & Sorcery it is!

I don't know how long it has held this position but USR SWORD & SORCERY is a Silver Best Seller on DriveThruRPG. Not bad for an obscure ameture publication. I think I even saw a few months back a pirated copy available online. So it is that big time as well :)

Anyways, really proud of this little game with big ambitions. Deluxe is moving along at the heart-breaker hobbiest pace. The AA03 module is still waiting on an acceptable proof to release the hard and soft cover editions with color covers. A whole back-log of shit really. Fear & Loathing in Fat City needs to get off the outline board and yellow-lined sheets of paper and squished into my laptop. That's another thing, the longer you work on a project the more certain you get your laptop is going to crash.

The total numbers include free copies, many of them mine. I believe how that works. Just volumes of copies downloaded. The actual paid for downloads of USRSS numbers is 188, just shy of 200. Total downloads is over eleven-hundred, so free copies boost your rankings kind of unfairly. Either way, this slim publication will be yanked as soon as Deluxe comes out, so who knows how long you have for an "original" edition? 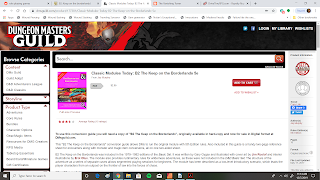 Oh yeah, my other early on project, Classic Modules Today, at DMs Guild continues to be as stand-out success for the Vanishing Tower. CMT B2 Keep on the Borderlands has gone PLATiNUM thank you very much. This goes to show you the value of a sellable brand. My stuff combined barely hits five hundred units moved while the licensed products, the Classic Modules Today, are in the thousands for downloads. Most of the other conversion guides have hit Silver or at least Copper as well. Once again, Vanishing Tower's most successful venture so far. 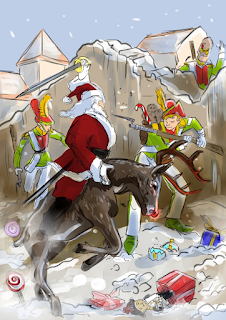 Santapocalypse has moved a whopping 4 units in legit sales, but hey, you do it for love of the game! Cio for now from the old VTP.
Posted by Jay Murphy at 12/12/2019 No comments: 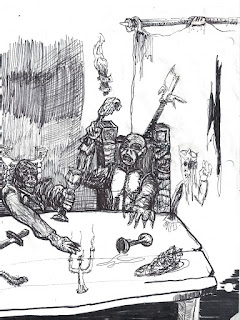 is my online game and I have been enjoying the taping and recording of these sessions. But with the crash of G+ and YouTube I cannot seem to get a reliable audio (or video) recording of these sessions. These recording issues have forced my hand once again to write in review of the games held in Rom’Myr Dying Earth Campaign. This current blog post is a quick summation of Sunday’s game...

The party is of 5, not all from the same world. Traveling the Averoigne wilderness they encounter the mule-thing Farthingnay. This enchanted beast of fairei compels the PCs to collect 8 threads from the Pale Knight’s cloak.

The party finds and penetrates the Pale Knight’s ruined palace. It is a crumbling pile haunted by dark obscenities. Feasting on the dead appears the main form of sustenance for the palace’s denziens. In the lower level dining room the party crosses blades and hammers with the Order of the Maggot, a martial order of ghouls. They claimed to be the personal guard and escort of his grace the Lord Bishop of the Pale. It appears the Pale Knight is holding audience!

An artifact of ancient evil was uncovered, a black cauldron. Toth, with his mighty hammer Jyfryth, sunder the cauldron in twain. The two thieves of Valla’Tair lead the way into darkness. It is not long before the palace responds to the party’s intrusion. Red and Silver Dragon soldiers, terror gnomes of in-between, clash with the PCs in a large chamber deep in the dungeon. Knives and axes snicker-snap in orange torchlight. The fight is sharp and swift. 8 of these creatures lay dead on the floor, for no race of man were these terror gnomes, while the party suffered wounds to the paladin Toth and Lumin of the Hidden Hand. The terror gnomes wielded short side swords in battle and capable of wicked wounds. It took much faith and bandages to restore their health. Vari’dell and Cree, the thieves of Valla’Tair, are only covered in gore from the soldier they slew. La Batard was equally unscathed.

The palace had more to throw at the brave party, the palace walls itself! Mere doors turned into mystic portals, dividing the party and leavining others truly lost. Cree, a monster-hunter by trade, is left stranded in an unknown cavern, vast and dank. He must move swift and silent, he must brave the terrors of the living dead and eventually return to the radius of the party’s torch. Erstwhile, the two warriors of faith, Lumin and Toth, scout and thief, all of them slay the petty-lych Skeelos, and restore Aladona to life.

How will the temporary alliance with the lady called Aladona and the PCs last? What awaits them in the throne room? Only the next game session can reveal!