I've created a Combat Tracker PDF doc so that I can better track initiative and turn progress for running combat during my Clockwork & Cthulhu campaign.

Specifically character's Dexterity as well as six boxes to be used to track reload rate for a character's black powder firearms. Whether you tick off boxes or write in what combat turn they expect to be reloaded and ready to fire. These boxes are intended to coordinate with the three sets of twelve boxes in the doc's footer. A regular combat turn is 5 seconds and so 12 turns gives you a minute. I usually tick off boxes for the character in question because sometimes their reloading may be interrupted before they finish. 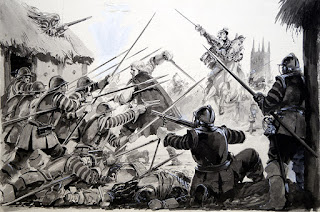 There is a box for tracking decreasing Hit Points and Sanity while the usual lines are available for pertinent skills related to their combat capabilities. There will be a permanent link for the document on the "Summonings" page of the blog so you can come get it anytime. For those who frequent the BRP Central forum it will be up in the downloads section as soon as I can get it in there.
Posted by Jay Murphy at 11/25/2017 No comments:

It is up and running, and will be evolving and improving as I go ahead and give my game stuff its own space.

The POD versions of USR S&S and HM&MM are still available on DriveThruRPG and the site links to the order page if this is the product you want. Purchase of either POD softcover book entitles you to the PDF as well so verifying your purchase with your customer number from One Book Shelf seems the simplest way to go for now.

At some point I will consider making a print run and sell the softcover books directly, but currently using a POD service is just the easiest way to go to get hardcopies printed and shipped.

The site will continue to see new adventure products added to the core rulebooks I've created.

[EDIT: 11/19/2017] My post here is poorly stated. The artist get's paid up front from a successful Kickstarter. How I wrote it yesterday makes it sound like the artist needs to hope the book sells to get paid. No, no, no. The project only happens if I know the subcontractor is covered.

As I toil away on the Big Black Book of Sorcery for USR Sword & Sorcery I can't help but think I would like a nice hardcover edition of the game. And it would have everything in it produced to date; the core rules, the new supplement, plus the BBBoS as well as the double stack adventure pack I'm working on for more adventures in the world of USR Sword & Sorcery. It would be USR Sword & Sorcery Complete. 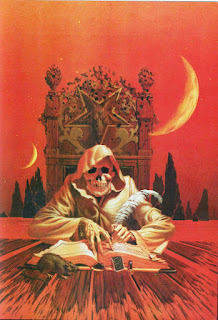 So I want an artist. I want original artwork which pays tribute to the Ernie Chan drawing and inking which sucked me into Savage Sword during the seventies as well as the indelible stamp of Frazetta and Vallejo which defined the image of Conan to me as a teen.

And I have no money so the artist who throws into this mad scheme would have to take 50% of profits from the completed work. How I see this working is I complete the text document, then an initial Kickstarter campaign to cover costs of printing and art (there is a local professional press - Gran Farnum) and then sell 400 copies to make a profit however small and call it good.

So if you would like to be the defining artist of USR Sword & Sorcery Complete contact me at your convenience @ +Jay Murphy. Two out of three books are currently complete and available for sale so text on the expanded magic and adventures is underway so by the end of January written content could well be done. Then layout, funding, and press!
Posted by Jay Murphy at 11/18/2017 No comments: 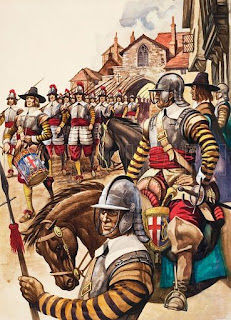 For my own reference here is a list of the characters which make up the Player Character's group in our Clockwork & Cthulhu campaign. The nominally secret (C)(l)ockwork (U)nderground (B)ureau's list of agents includes;

The rest of the party consists of the NMA soldiers assigned to Zeal's company when they set out for Yarmouth. Here is the roster of the current living and combat capable NPC's;

This is the roster of casualties since the company left Norwich;

It sure took long enough for the third PC death of the campaign. Craigh the Outlaw Scot looked where he shouldn't have looked and promptly disappeared like smoke up a chimney. The character's player left the character's choice up to a die roll. I don't know what contested roll against himself he settled on, but it was not the first time he had decided character action by a roll against probability. D100 of course, this is Renaissance. 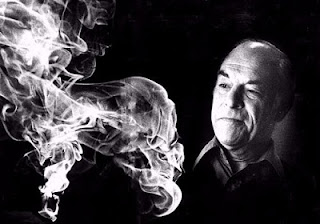 The NPC body count has been gruesomely high during the game's run and at first the two earlier PC deaths seemed appropriate and fit the pace of my fiendish tastes. But man, there sure was a lag between two and three. Initial characters are robust due to a more generous damage mechanics than found in typical BRP games such as Call of Cthulhu and Elric! The chance for quick death does not punch in until characters are in negative Hit Points. Musket shot at 2D8 damage always pose the threat of serious shredding, but yes the PC's can take some punishment before Serious and Grave Wounds takes them out of the fight.

Of course in the world of Clockwork & Cthulhu horrid magic and weird creatures can exact quick (or lingering) death. And this was the situation for the scotsman Craigh. The mysterious hole had the words "Gaze Not" scrawled above it. So it was presented as threatening. It wasn't random, blam, you look in the room and then you are dead. The player had to make the choice. And I use these death puzzles sparingly. Suites the flavor of the game world; grim and deadly. I also make a point of sometimes fiddling with obscene things may work in the player's favor. I think it is a 70/30 mix. Seventy percent of the time you mess around with arcane forces you will get hosed while thirty percent of the time it will confer some advantage or vital knowledge.
Posted by Jay Murphy at 11/14/2017 No comments:

+Pete Segreti was one of the original playtesters for USR Sword & Sorcery and a fan of +Scott Malthouse 's rules-lite mechanics USR in general. This morning he had a full table make a successful run at the introductory adventure found in the rules Shrine of the Keepers!

Never has been seen a more blackhearted bunch of thieving dogs I say!

Pete posted about his experience here. It sounds like much pulpish reaving was accomplished. I wonder if the PC's don't mind leaving the city of Tizuk since their ill-gotten gains will find no buyers within the city walls...? 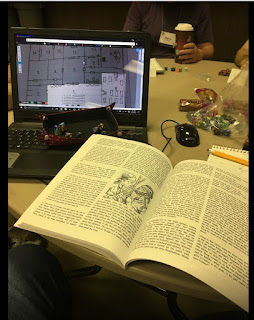 This is Way Full of Spoilers... 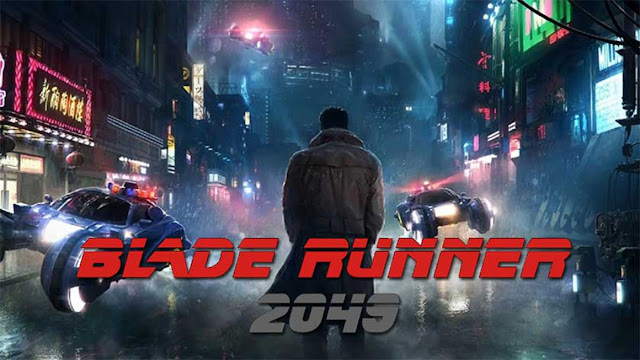 In an earlier post I stuck my thumbs, way up for the Bladerunner sequel. I have also viewed Razor's video film review and I can't say I disagree with him much, except while his criticism are valid, do not alter in anyway what a great movie the sequal is.

I felt the new movie was packed with subtext. That the ideas were so very big and so much was packed into this "slow" movie that any legit critique on the films visual product just doesn't distract from the movie's storytelling achievement.

Some of the obvious subtext packed into the visual narrative were the male car power symbol and the replicant Love's savage "womb" murder of the police chief's tightly bound emotional messiness. And none of that film noir voice overs to tell you what is going on or what people are thinking and feeling. The workmanship way the protagonist was hauled out of the skies by the garbage pickers in San Diego, loved it.

Visually yes the movie has stunning scenes, but as would be expected it is not so much the elements but the expert handling of space. Intense focus on the individual while moving through various layers of physical space from the claustrophobic to vertigo inducing openness. This never lets up. No matter where our main character finds himself there is always the pressure of the "other". Never does our hero feel alone, but at the same time completely isolated.

These are all boringly, maddeningly trite cliches fleshed out during early twentieth century literature. I think it was called "Modern" literature or some such. Sartre covers all this.

I like the fact that "every" current replicant is set up to believe they are the miracle child.

The very human police chief, she is awesome. Could have done without Deckard. Really, the time involved would erase his existence. The concepts being tackled could have withstood this earlier character's abscence. Shouting in the car, asking questions with no answers. Big fat rabbit hole.

The villain's answer to the paradox is simple and archetypal. Unmoving cosmic forces given the face of flesh. Good sci fi movie. I look forward to watching it again and letting it marinade in my psyche some more. And all this yes the criticism are all still valid and it doesn't matter.

Email ThisBlogThis!Share to TwitterShare to FacebookShare to Pinterest
Labels: Sci-Fi

Here are the stats I've used for the NPC's the players have come across so far in our "side" campaign game; 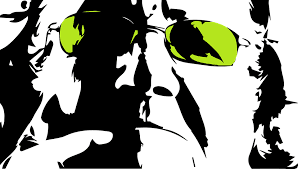