The following are suggest steps for resolving all three of the different game activities with the USR game system, it should point the CK in the right direction for adventure excitement. 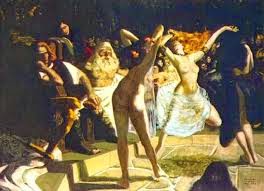 The character makes a contested attribute roll against the people involved.

Relevant situational modifiers and specialism bonuses are factored. Critical success and fumbles are in effect.

The CK adjudicates what a win and a loss looks like.

The CK decides how many checks should be made but the idea is to focus on describing the results of a die roll, not to roll many dice.

Usually no more than two or three attempts at an individual contest can be attempted.

The seducer and the victim roll a contested attribute roll against Ego to find out if the victim resists the seduction. The unwilling victim and the seducer can modify their roll with apt Specialism, such as Diplomacy, Seduction, Charm, Court Etiquette, etc. If the victim fails to beat the seducer’s roll, the seducer is doing well and may continue. Otherwise, the victim realizes what’s going on.  Willing participants need not make checks to resist a seduction attempt, but simply give in to their aggressor's advances.

If the victim’s roll succeeds, it means that they realizes what is going on and lose interest, become angry, find amusement in the seducer’s efforts, etc.

The seducer can try again, but must subtract 2 from their roll each time the victim beats their roll.

I've gone and made up a character sheet for USR Gunslinger with the idea of writing up a rules hack of TSR's Boot Hill. I've posted it to my Summonings page here at The Vanishing Tower.

So this means I will actually have to write up these rules some time soon or I'll just have characters running around with no rules to govern their behavior. Now that sounds like the Wild West...
Posted by Jay Murphy at 2/15/2015 No comments: