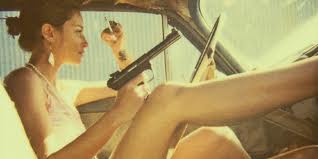 For all your Two Fisted combat needs!


1. Declare Intent: Here all players get an opportunity tell the GM what they plan on doing for the upcoming Combat Turn. If someone declines to declare their intent, that is fine. The only penalty for not declaring intent in this phase is the GM may rule your intended action a failure for various reasons, such as the influence of other actions which have already occurred in the combat turn.

2. Roll for Initiative: This will most likely be every one's Action die. The combat turn is resolved one player at a time in order of initiative score from highest to lowest. For such Ego based powers such as psionics, magic, etc. an Ego die may be asked for to resolve the players initiative score. The player whose turn it is is the attacker.

3. Resolve declared intent in order of initiative: Moving, Attacking, and Other Activities are the three broad categories PC's will find themselves involved in on any given combat turn. Usually moving in for an attack, or moving in an attempt to defend, or moving to escape confrontation are routine examples players can expect to see in any given encounter. How are you going to resolve all this shit?

With USR, Scott Malthouse's free rules-lite RPG,  it comes down to an Attribute die roll with all modifiers factored in and affecting the final total to resolve all actions.

Melee attacks, and other activities pitting the PC against any active agent (pirates, robots, apes, etc.) are Contested Attribute rolls. The attacker totals all specialism bonuses, and any situational modifiers. Likewise the defender does the same. Both attacker and defender roll their attribute die, and the defender's combat total is subtracted from the attacker's combat total.

If this number is positive this is the amount of damage, or "hits" the defender takes. If the total is a tie or negative the defender is unaffected. What about Armor? As in the USR basic rules, Armor is added into the defender's combat total. What about Weapons? Weapon bonuses are able to be added by both the attacker, and the defender to their respective combat totals. As the GM you will have to use whatever bonuses for weapons used seems most reasonable. Effects on initiative, and first strike should be considered as well with weapons, such as spears vs someone armed only with a dagger, or bare-fisted.

If the action is something other than a melee attack a critical "hit" represents more of a critical "success". Whatever the attacker was attempting to accomplish succeeded beyond expectation.

A fumble is merely the reverse. The attacker has rolled a natural 1 while the defender has rolled their natural high number on their attribute die. The attacker rolls an additional 1d10, and on a score of 1 the attacker has fumbled his attack/action. What the exact fumble result is to be will be declared by the GM. Having some of your favorite fumble tables from any of your games will be useful here.

Nonlethal Combat & Nonlethal Damage; I've decided that there really isn't such a thing as "nonlethal" damage. But there are certainly degrees of severity of damage. The damage received by a gunshot is much different than the damage sustained from a sprained knee, or a tazer. Therefore I've decided on damaged received by getting pummeled by fists, and other brawling actions is recorded as normal, but only half the total damage is applied directly to Hit Points. For example; Joe Bruno lands a meaty haymaker inflicting 8 points of damage. Paulie Newman sees stars for the moment, and deducts 4 Hit Points. What about getting knocked unconscious? Whenever a character receives half their total Hit Points in real damage in one combat turn then the character is out. Seriously wrecked, groaning, and writhing. Now this is the character total max Hit Points, not their current, wounded Hit Point total.

Ranged Combat; Attacking at distance is an attribute roll vs. an assigned difficulty number. This difficulty number is based on the range of the attack. Once the difficulty number has been established any situational modifiers and/or specialism bonus need be applied. For example, leaning against the bar cradling your Walther PPK 9mm at close range is a much different shot then diving for cover over the same bar squeezing off three rounds as you go at close range.

Difficulty Rating based on Range;
Point Blank, Easy-02 (The weapon is very close or actually touching the target. It will almost always hit doing maximum damage)

Close, Medium-04 (The weapon is attacking at one quarter the listed range)

Medium, Difficult-07 (The weapon is attacking at one half the listed range)

Long, Hard-10 (The weapon is attacking at the listed range)

Extreme, Extremely Difficult-14 (The weapon is attacking at twice the listed range)

Damage in ranged combat is augmented by the particular firearm in use. Using your preferred Weapons Table of choice just add the Damage dice as an additional factor to the total damage achieved.

For example; Joe Bruno fires his .45 automatic pistol at an intruder and achieves a hit. The pistol does +6 additional damage per shot which hits. This is in addition to the amount of damage derived from the initial Contested Attribute Roll for the attack.

The first step in applying damage is to figure out where to apply it. Most  combat attacks are just barely aimed; you're looking for an opening, your opponent slips up, and you take it. This means that unless you attempt to aim your shot at a specific location (and take the an increased difficulty target number), you will have to determine where you hit on a random basis.

If the Hit Location rolled is a part of the body which is behind cover, the shot hits the cover instead of the intended target. This will usually negate all damage unless the weapon used is capable of penetrating the protective cover.

Any armor worn on the Hit Location will reduce the damage amount by the protection given, including for called shots. You will have to come up with your own appropriate armor table and each types stopping power. This is the amount of damage reduced by any hit delivered.

For additional realistic detail you may apply debilitating effects for certain amounts of damage. Generally though, a well place gunshot will wipe you or your opponent out with one shot. So keep your head down!

To simulate the cinematic nature of your Pulp hero bouncing back from terrible blows a player has a Second Wind value equal to 1/4 their maximum Hit Points. Characters can use their Second Wind to add that value to their current Hit Points once per game (not once per encounter!) and they can only do this in combat immediately after having been struck by a foe. Additionally, a player must role-play what their character does to gain their Second Wind; pithy one-liners, profanity-soaked oaths, and emphatic demonstrations of bloodlust are highly encouraged.

Time Travel... The Ultimate Cross Over for your Genre Tree

If there is a genre on the menu which immediately doesn't grab the players, then perhaps the Time Travel option of the Espionage branch of the RPG Genre Tree will give them the exotic pallet which to paint their rpg masterpiece! Whether a dedicated agent of some "Time Patrol", a victim of a scientific experiment, or an unwilling pawn in temporal battles, time travel adventures literally cover the entire spectrum of time and space. A Time Travel or Cross Dimension campaign allows for the widest possible variety of player characters and NPCs. Characters can be drawn from any world in any time!

For my RPG Genre Tree Time Travel Branch I would give my prospective players the following two options; Time Corp or Accidental Tourists.

3.3.1 Time Corp; a tight knit group of jumpers dragging a string of windows through time. Some Absolute Now is maintained to avoid Crunch Time, while your group pursues its mission dictate.

3.3.2 Accidental Tourists; besides being able to utilize any other campaign world I've designed for the RPG Genre Tree to fulfill my players whimsy, thereby recycling already prepared material, here I can also put forth any compelling visions I have for an intriguing campaign world.

Underpinning my Time Travel campaign I will rely on my USR/Cyberpunk homebrew rules set. Actually, a revised version of the Cyberpunk rules as I continually tinker with how I plan on running combat. Specifically how do I address ranged vs melee, and deadly vs non lethal damage. Pulp era stories and movies offer a nice touchstone for adaption of the mechanics for all sorts of game genres. Here can be found a garden of cinematic action which can be lifted whole cloth into any campaign as long as you know how you plan to house rule it.