+James Young wrote up a great Critical Hit and Fumble table for his LotFP game and I have adapted it for my USR game.

While most games, including USR, structure combat around an attacker and a defender, I've taken the plunge with simultaneous action in combat. This means any critical hit or fumble mechanic which catches my fancy will have to be modified to account for any one of the combat participants receiving an extraordinary result based on both participants roll.

Also, each actor in the drama does not necessarily use the same dice so I have to consider how to determine critical and fumble results which account for this variable as well. For the raw mechanic I considered how Chaosium's Elric (as well as their BRP system) handled criticals and fumbles. But I don't have the luxury of a generous d100 point spread to move around in and I was concerned that, with combat dice ranging from d4 to d10, a natural 1 is going to come up more often than I or my players are going to want.

Here is how I structured the mechanic; If you roll a natural  1 or natural  high #, you compare against opponents roll. If your opponent has also rolled a natural 1 or natural high # it is time to check for Critical Hits and Dramatic Fumbles.

Here is the link to the Crypt Keeper's Screen where the current Critical Hit and Fumble Tables can be found. 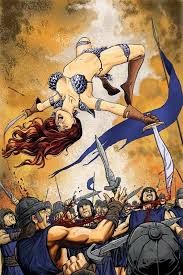 For hit location just use your favorite chart. I'm using my hit location chart from Chaosium's BRP system, but really any one will do. I think FGU's Aftermath has several which covers humanoids and animals large and small, for example.

All my rules for the game so far can be found on the Summoning page of my blog.
Posted by Jay Murphy at 8/18/2014 No comments:
Email ThisBlogThis!Share to TwitterShare to FacebookShare to Pinterest
Labels: Pulp Fiction, USR

My players have made their way from the harsh ranges and stony adventures against bestial hillmen of the Zorab Mountains to once again retire among the wine shops and money lenders in the city of the Grand Inquisitor, Dipur.

They left behind in the flinty peaks high hopes of renown, valor, treasure, a hireling and not much of a pay day. They also left behind a dead, corrupt Count of Castle Highfrost, but instead of glory have been painted with the traitor's brush.

And now I have to get all the prep done for a wide open, sandbox style sword and sorcery opportunity in a sprawling city for tomorrow night. I'm putting on a pot o coffee, pulling out my Conan paperbacks and listening to some Black Mountain.

Anyone is also encouraged to throw me some ideas on generating a pile of adventure hooks and adventure seeds to send these scurrilous heroes into the mouth of hell! 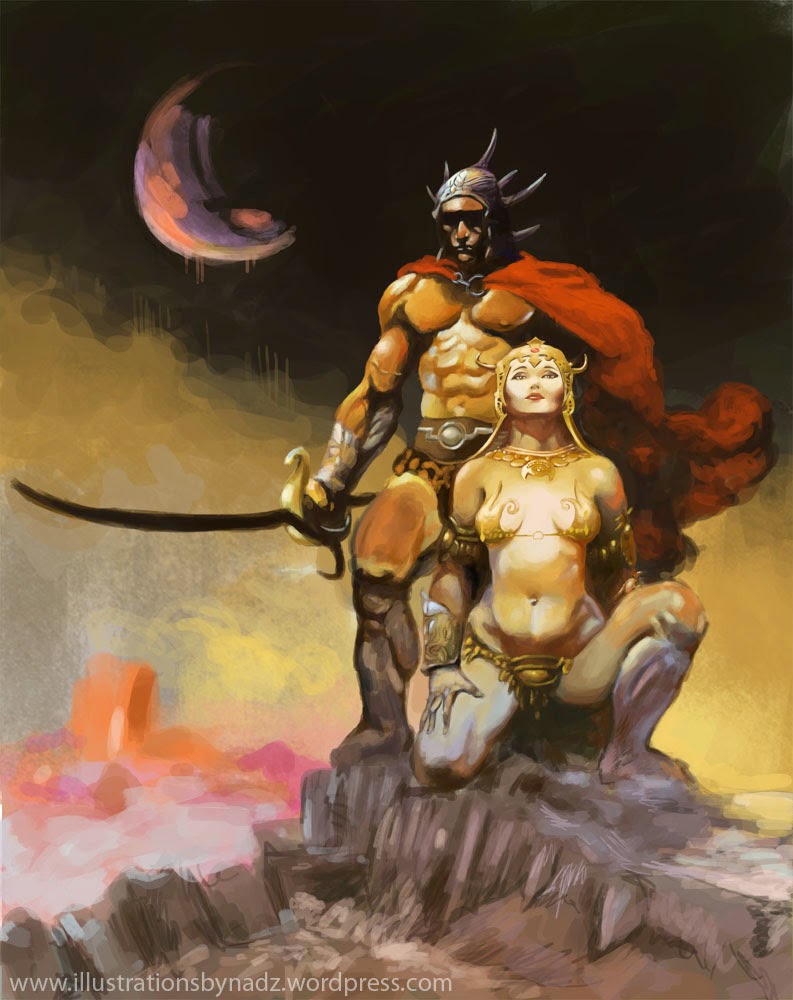 G’wood has a new place for gamers to gather

Things may be turning around here for face to face gaming opportunities...


Many tabletop gamers have dreamed of opening up a store catering to their hobby, but in the Roaring Fork Valley, they’ve never seemed to stick. Since the demise of Mark’s Toys and Pets, locals have been generally had to travel to Grand Junction or Denver to buy role-playing dice or participate in a card tournament.
They don’t have to now.
Since February, word has slowly spread about the Jester’s Court in the basement of the Tamarack building at 10th and Grand in Glenwood Springs. The store is open only limited hours three days a week, but it is gaining a following.
Sean Wagner travels from Grand Junction to run the shop from 2-7 p.m. Tuesdays, 2-9 p.m. Fridays, and 2-7 p.m. Saturdays. He sees a lot of potential in the area.
“There’s a lot to be tapped around here,” he observed. “There’s plenty of gamers.”
Sean and his wife, Trudi, operate a larger store in Grand Junction and two in Wyoming. They’re starting small with the Glenwood store, but have the experience and business savvy to help it grow.
Right now, they’re catering mostly to devotees of the card game Magic: The Gathering, which, oversimplified, is a battle of complex rules among wizards whose powers are determined by the cards.
“Magic’s king,” Wagner explained. “It carries any game store and makes everything else possible.”
“Everything else” includes all sorts of “unplugged” tabletop role-playing games such as Dungeons and Dragons as well as a host of board games including Settlers of Catan and Diplomacy. You won’t find Monopoly or Halo among their selection. You might be able to convince them to order Risk, but you’d be better off asking for a specific Magic card.
The games themselves are only half the point.
“We provide something other places don’t: a place to play,” said Wagner. “We build gaming community in our stores. It’s a special thing. Everyone comes together in a game shop.”
The Jester’s Court hosts Magic: The Gathering tournaments on Friday nights, which usually attract 10 to 15 enthusiasts. Most, but by no means all, participants are in their teens or 20s.
Will Kribs, a 17-year-old Roaring Fork High School grad, stops by the shop almost every day it’s open.
“I can meet new people here,” he explained. He had a handful of people to play Magic and D&D with at school, but the Jester’s Court attracts people from all over the Roaring Fork and Eagle Valleys.
Tylor Kantas is another constant presence. Now 25, he grew up in the Valley.
“We had small groups in school to play,” he recalled, “but a lot of us went different directions and we lost the community.”
Kantas, who participates in Magic tournaments in Grand Junction and is even planning an outing to an event in Salt Lake City, found out about the shop through a friend. He now helps the Wagners out on a volunteer basis, and is such a fixture many customers mistake him for an employee. He’s just happy to be a part of the budding community.
“It’s all about fun,” he said. “Everybody comes in and gets to be their real selves.”
As the community grows, so does the potential for other events like Dungeons and Dragons-style tabletop role-playing or Warhammer competitions. If so, the business will likely outgrow its cramped underground abode, but for now, you can stop by 1001 Grand Avenue, Suite 002.
Posted by Jay Murphy at 8/17/2014 No comments:
Email ThisBlogThis!Share to TwitterShare to FacebookShare to Pinterest
Labels: FLGS

Since TSR's Basic Dungeons & Dragons with the Erol Otus cover in the magenta colored box was my first rpg purchase way back in 1981, it seems fitting my last purchase was the wonderful retro clone Basic Fantasy Role Playing Game.

With all the free material of quality available online, including Basic Fantasy in PDF format, I've forced myself to be real frugal with actual cash expenditure on rpg books. But Basic Fantasy did it right for me. A free PDF led to a Lulu purchase of the perfect bound, publish on demand copy of the game. The cost of the book was, like ridiculously low, and with a shipping discount being offered it was a no brainer. 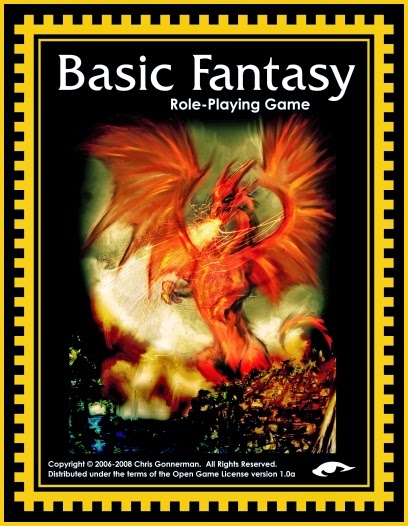 The game gave me the house ruled tweaks I wish I had thought of while retaining all the flavor of the great game I first came to love.

I have further modified my Basic Fantasy with the best aspects I find from LotFP (also available for free in PDF format), and all those folks making cool character sheets, free adventures, Game Master aids, etc. just make this product one of the best rpg deals going.

S&S in the World of Xoth 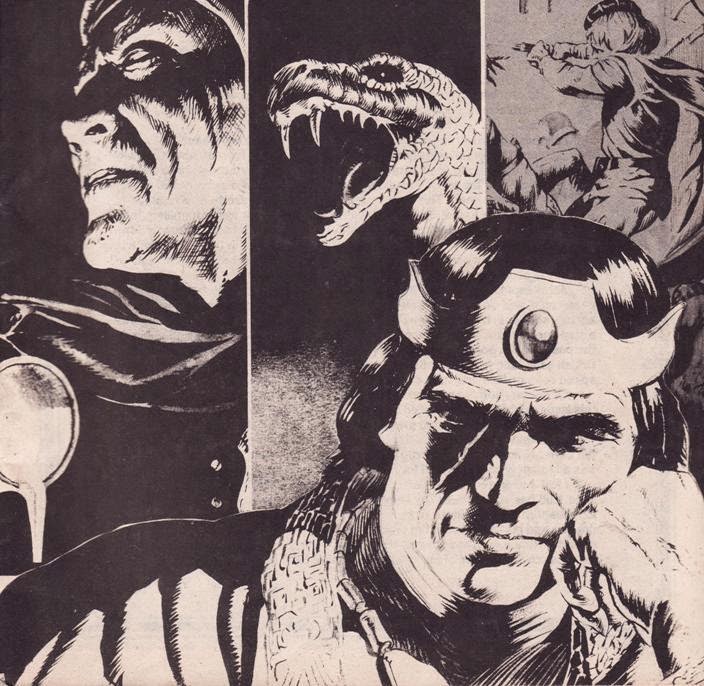 My USR Sword & Sorcery campaign soldiers on and I now have enough game material cobbled together to post them here. Since many of the tools I used are not my own this post serves to recognize the authors of the material I use for my

U.S.R (Unbelievably Simple Roleplaying) is Scott Malthouse's rules lite game mechanics. It is what my game rules are based on. I have just taken Scott's text and hacked it to my tastes.

Character Background's have been lifted from the Elric! rulebook from Chaosium. Same for the basic equipment table.

Campaign Background is from this guy Thulsa who created his own Sword & Sorcery setting he calls the world of Xoth.

Ben Ball's Random Sword & Sorcery Adventure Generator for use with Astonishing Swordsmen & Sorcerers of Hyperborea is something I also rely on to populate the land with adventure seeds.

The USR character record sheet is by Charlie Warren of The Semi-retired Gamer blog.