I have found myself crawling into an online campaign manager and am surprised how it has captured me completely, enthusiastically as the new way to chronicle my campaigns. If you would have asked me would I use a digital record for campaigns let alone think it could be used in session I would have said no. I would wax on how the physical journals with homespun maps and weird characters was all part of the creative process, blah, blah, blah. The fall was swift and rapid. I was looking for a way out of my three ring binders, that is for sure. But my quest had only progressed as far as trying different types of notebooks and drawing pads. Part of the quick commitment came from my noodling with Roll20. I hated it. I could not see how it was going to help me run the game I want to. So, when I started banging away on my new kanka account writing up session notes from the latest run I went fuuuuuuck. I am going to throw out a bunch of old thinking. 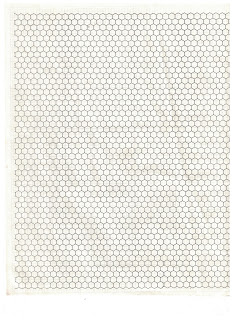 Specifically, being unwilling to see the benefit of online tools for my online games. Because I was not getting any with virtual tabletops. What I like about the campaign organizer, the campaign wiki I think it is called, I don’t have to search through a three-ring binder to find shit. Cause it piles up and the binder gets thick and becomes horribly inefficient in session. This is the virtual note board of interlocking world-building pieces and I’ve so far found a spot for everything. Cutting and pasting in stats and details from PDF content makes these things at my fingertips. Only redundant task I have found slightly wearisome is attaching pictures to entries, but I can not do it because the return on investment, the visual payoff is high.

So, I get all the things in the wiki set for the current session coming up and take a look. Start at the Dashboard and drill down into the data I am going to want in game. I like how it works. I see myself running a session from its screen. I think it is going to give me a bit more focus on the situation at hand and roleplay more before a calling of the die.

Oh, and now my game is on the cloud. I can pop in and tinker on the game wherever I am. So my favorite materials, maps and images are all at my beck and call when inspiration strikes!

By far the first reason I say this great book is the best version of the game is size. It is slim. Total content clocks in at 135 pages in a reliable perfect bound softcover. It deserves a hardcover treatment. In the forward the writers come out swinging with the games strongest pitch, create any power, any ability to build your unique superhero. And this is true. The point-buy system of Champions coupled with the “Special Effects” rule wrapping the whole powers concept championed by the authors has not been superseded by any other supers game I’ve tried. And this is no different through any of the editions of the game, from first to fifth. But I think Hero Games kind of missed the boat here. The Crystal Ship, the flashing gem which really shines through the third edition lens. Through those few pages. And treating the game like it should be: Old-School! What I am talking about and will eventually get to is the utility of the system's damage mechanic.

Now I can swallow fourth edition, it is the last iteration of the Hero System as Supers-centric game system, and fifth is a travesty. Most of the additional pages in the fourth are sourcebook stuff which gives the Game Master some useful features to use again and again, like stats for regular folk. But the lower page count in the third does not water down the game system at all and is the perfect set of rules for the GM who needs no assistance in how to play superhero rpg’s.

Fifth edition is an endless swirling mess around all the basic mechanical features which make Champions a genius of a supers game. Here is my case: The game has for a basic resolution mechanic of 11 or less on 3d6 for success. It is like Classic Traveller in this regard. It uses 2d6 with an 8+ needed for success at anything you are trying. The 3d6 bell curve is sweet though. You get a little more granularity with a bigger spread and I have come to appreciate the difference between a 9 or less chance and a 7 or less chance with three die. But what I find intriguing most is the damage system. There isn’t anyone reading this who doesn’t know how damage is calculated in a Champions game, total on the die is total stun damage while the number on a dice determines whether it should be counted as 2 Body, 1 Body or Zero Body. I think this mechanic is sold short if only used to adjudicate damage. I try to sell it at the table as a means to resolve contested actions. Take the arm-wrestling example. Hero A has a Strength or 20, Villain B has a Strength of 20, who wins? I have the contestants roll their Strength “damage” and count the Body damage. Highest total wins. With both participants at a Strength of 20

There is a universality across the game system which needs to be taken advantage of for optimum play. And this is in how, no matter the power, effect, or type of attack the values and scale never change. This means a GM can make a “ruling not rules” decision on the fly and if using a “damage” result from the rolled ability a GM knows it is always to scale. Not only is it to scale (in other words, fair) it has built in variability. Using our arm-wrestling example above, either one of the contestants can roll a value from 0-8. Variability creates tension. This is good. It begs for a player to figure out how to stack the deck in a fair fight, how to get their roll to be less swingy. I’m the GM so I don’t have to worry about how that would be possible, only to rule on it😊

Works for characters of wildly different power scales in any particular contest. Sure the 60 STR brick should win against the 18 STR martial artists in an arm-wrestling contest, but it isn’t guaranteed. And the correct and fair chances of a surprise upset is built into the system. The uncertain future of any supers action is baked into the damage calc pie. If you want to add an additional variable you can count the Stun damage as well. No matter how you interpret the results you can’t come up with a bad interpretation, but you can have surprising results! This look reveals the transparency inherent in the system as well. I can match Ego vs. Dex, Energy Blast versus Presence, any crazy-ass thing. And it will still be at a correct scale that results will always be an exciting roll while at the same time no one participant getting nerfed.

Let me take this to my logical extreme, where regular Champions players cringe in horror. Initiative! The rules for initiative for action tracked on the Speed Chart are fairly standard. You will find this set up in many a ttrpg. That is, when opponents square off and they both get to take action the character with the higher DEX goes first. All-the-time. Chaosium’s BRP rules have a similar approach to initiative and is even less dynamic. At least in Champions you have the 12 segment Speed Chart which makes for unpredictable, yet trackable results and situations. My distaste here is the predictability of such an accounting in what should be the most unpredictable moment in an action-adventure game. Here is the set up to illustrate my point; Hero A and Villain B are going for the doomsday switch in the same segment. They both are equidistant and have the same SPD but the Hero has a DEX of 30 and the Villain has a 20 DEX. Per the rules as written the Hero is going to win that contest every time. Every-single-time. Yawn. A smart, clever and good-looking GM will call for a damage roll based on DEX. Most BODY damage gets to the doomsday switch first! Hero has a better chance of winning out then the Villain, but it isn’t 100%. Yes, exciting! I don’t consider this an approach to be used all the time. Only for really cinematic, pulse-pounding moments in the story. This makes for the elasticity of the system to really shine. Unfortunately, you will never get players to accept it. They will run to FRED faster than my Derby pick for the back of the pack. And that book is proof-positive you can take a great supers game and fuck it up three ways to Sunday.

What makes Champions 3rd edition the best edition of Champions? 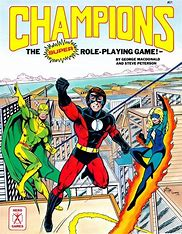 Posted by Jay Murphy at 12/17/2020 No comments:
Email ThisBlogThis!Share to TwitterShare to FacebookShare to Pinterest
Labels: Champions, superhero role playing

Going through my DriveThru library I came across a booklet from the great Rafael Chandler and seeing as I am chewing my nails as Denver may pull out a win at +660 (I have Denver +50, even money) I am whiling away the final moments by converting the paper tables to an instant generator.