A Present of, and a Review of Castle Xyntillian by Gabor Lux

Gabor Lux is a fantastic person. He is undeniably generous. His output under the Echoes from Fomalhaut label numbers 60 individual publications spanning more than a decade of OSR creations. This not only makes Mr. Lux prolific, but an artist who has printed content throughout the history of the OSR movement from 2003 to the present. His blog Beyond Fomalhaut should be recognizable to most OSR aficionados and needs to be added back into my blog’s recommendation list. His zine Echoes is comfortably weird and always worth a read.

So, this guy is mind-numbingly good and a great example of how gaming product should be made when offering to the consumer-at-large. I recently purchased EMDT 57 The Nocturnal Table from his line. I wanted another generator for random city encounters and this 2019 digest-sized release looked like a smart choice. Well, really, I knew it would be a smart choice because it is from Gabor and Gabor’s shit does not suck. The price was very affordable considering the book was coming from Hungry and the bouquet of DIY chewy usefulness packed between the pages. And it was an extremely fortuitous time to order as well. Seems my transaction was his 1,000 foreign commercial exchange and Gabor acknowledged this by sending me a beautiful hard-bound copy of EMDT 60 Castle Xyntillan, a 131page OSR adventure tribute to Judges Guild’s Tegal Manor. Tegal Manor is known as an original example of a “funhouse” dungeon, a module packed with interesting, unpredictable encounters with a loose or even no overall relation to another.

It is not a small book, not digest size. More like hardcover catalogue size? The cover art is original, a Peter Mullen creation. There is a liberal amount of original and public domain art and uses the wonderfully efficient presentation of two-column text on white paper for easy reading and scanning. 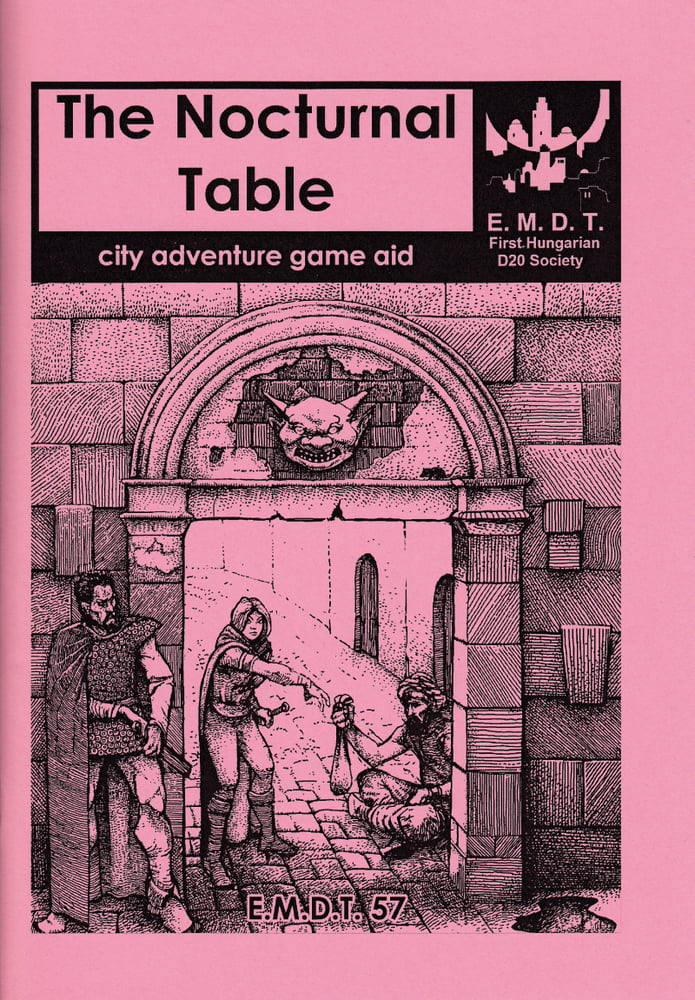 Besides a large dungeon the book includes 5 pages of useful tables, a DM’s traditional tool which has come of age. Ordered in a sensible method these pages are there to squirt out hirelings and NPC’s with personality and information. The duplication and addition of maps, another sign of OSR haute couture, is present throughout the book, including the end cover pages. The addition of interior end cover pages with the castle’s map is something you cannot get from a Drivethru POD and gives a traditional publishing house a reason still for living; providing a print run tailored to a ttrpg adventure book. Castle Xyntillan has been designed for the Swords & Wizardry game and is suitable for 1st to 6th level characters. Castle Xyntillan has been designed to be versatile, open-ended, complex, and accessible. This module should provide ample opportunities for exploration, confrontation, and subterfuge. Whether you would like a dungeon for one-off expeditions and convention play, or repeated forays and full campaigns, this book should suit those demands.

Seeing as I have recently acquired it, I cannot divulge the value of the majority of the book, the keyed dungeon itself. But it has been extensively play-tested. You know this because the introductory pages list all the Player Characters (not players) that survived and died in their forays through the dungeon. It is a long list. Besides, it is Gabor so you know it must be good. The cherry on top of this lovely book is the location marks for each and ever Player Character which died in the dungeon. The big spreads on the end pages contain the dungeon maps and the location and name of the dead PC is placed on the map. There even is an MIA list, adventurers who’s fate remains unknown. Sweet.
Posted by Jay Murphy at 2/25/2020 No comments:

Email ThisBlogThis!Share to TwitterShare to FacebookShare to Pinterest
Labels: Dungeons and Dragons, OSR

[The Completed Interview can be listened to here]

Looks like Frog God Games has been making the rounds promoting the success of their latest kickstarter and the Vanishing Tower Press has been tapped for an interview. Super excited for an opportunity to interview Mathew Finch. One, I do have some topics I would like to discuss with any OSR luminary, let alone Mr. Finch. Two, the Vanishing Tower has not conducted an industry interview ever, so it is a great moment for the press itself. And third, I give good interview. At least I have in the past. Just like gaming, I have been out of the gonzo interview business almost as long as I was lost to TTRPG's. So it should be a worth a listen for that alone.

I would like to live stream and record at the same time, but it is to important of an opportunity to have everyone hanging on air while my horrible media tools melt down around me. So next best is a recorded interview. This provides editing opportunities, but I always found going live the most exciting. Most like a role playing game, the spontaneity and unpredictability of live takes is tonic for the manic!

Don't miss it, I will be posting it. Currently scheduled for next week, then edits, so two weeks and I will have an interview to drop?
x
Posted by Jay Murphy at 2/17/2020 No comments: