DM’s, use your adventures again and again!

I’ve put together a “What can I use for this?”folder of published game stuff which slot seamlessly in current or possible future encounters in my active games. I do this for two reasons: One; I love sand-box play, but I don’t always like the on-the-heels feeling I can get when I’m out of material. Specifically, material which would be AWESOME in the current situation. I have a freakish belief if I had access to all current written adventure modules, properly indexed, there would be something just perfect needing only the most minor cosmetic changes. That is my idea of no-prep! So I get really jacked when these twin stars line up. Two, the real gems stand out. Old, new, retro, funny dice; its hard to know how a scenario will aid thee in the hot-seat. I have retracted blistering criticism I uttered upon reading an adventure only to humbly withdraw it after using in a game. Funny how my opinion from just reading adventure material is so off from the actual play experience. When it works when the material carries you, folded and safe in its hands, through multiple sessions of metal rpg’ing its like conducting an orchestra. The difference being, when you get off the hot-seat and bow, acknowledge the orchestra, you do this alone. It is truly a private and disconnected performance between writer and game master. I love this part of rpg’ing probably best of all. 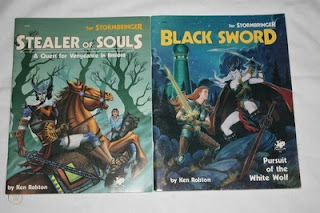 So it isn’t a far leap to “What adventures do this for me? Pulling the book out started this whole thought project. Using it again to key another fantasy location. The book is Chaosium’s Black Sword for Stormbringer by Ken Rolston. It is a companion piece to Stealer of Souls; a champion in its own right. The only reason Stealer of Souls isn’t number one is because I like Black Sword better. The scenarios in the book depict a woman’s quest for vengeance against Elric himself. This sort of set-up is rarely going to be used in one of my games. If you are playing a game of Stormbringer with me, you most likely won’t be in the Young Kingdoms. I’m sure it can be epic, but I have a disinclination to use fictional characters found in the original prose. The fictional setting I’m using because it is cool. That is most likely why it is in use, the place is inspirational. Give people, places and things new names and done. With more than I need in the attending details of the location.

If I don’t like the script of of Black Sword why is it so good? Because Black Sword passes the acid test; it is extremely useful for play. Freyda Nikon, the “Patron” driving the plot, is a decent NPC. No reason she has to be married to the script. I prefer to have interesting NPCs met when circumstance, the game situation, demands nothing short of this character being used. The right person for the job, so to speak. Frieda is easy to place, in many different roles. She’s metal.

The scenario book includes the city of Nadsokar, the Kingdom of Org, the city of Karlaak, the Plains and the Badlands. Any one of these sections, these site locations, can be lifted wholesale out of the book and dropped into your campaign. With Nadsokar, city of beggars, the most useful part doesn’t even include stats! Two and a half pages of “in-the-day-in-the-life-of” and a portion of the streets of Nadsoker underground mapped out. With one of those slick city-crawling mechanics DIYOSR creators introduced and some kind of citizens stat block you can go for a while in Nadsoker, the City of Beggars. Good place to note, if you have read the fiction, cause all your game inspirations come from the source material, you already know what is cool about it.

The nuts of the book, the most metal part, is The Kingdom of Org. If you’ve read the source material you will know when you should use this location. And it is not just the degenerate, horribly pulpish vibe of the place. The Kingdom is found within the Forest of Troos. The heavy-metalist of magical woods. Details of a slave rebellion if you are inclined, but the daily life of Org has many options of grim encounter. Again, your favorite city-crawling method will have PCs dying for your pleasure in nigh poetic manners.

The rest of the book similarly works in this fashion for me. Again and again. Oh yeah Stealer of Souls has great city maps and material with the details of Bakashaan. It is a good clone of Messantia, and therefore squishy-pulpy city which include the ocean and sea travel and the scum it attracks.

These two books aren’t for everything. My experience relates using it for the genre intended.

Dropping modules into modules is a big kick of mine. This Matryoshka-doll method mixes up the presentation enough players stand a good chance of never recognizing it. Simple example of this with some 1e AD&D stuff. D3 Vault of the Drow is this psychedelic dark elf city underground. It is big and has room for many interesting locations. More than I want to come up with. What can I do, what can I do. Evil metal elves will have slaves. They have a whole industry of it in the Vault. May I present A2, Secret of the Slavers Stockade? I don’t care how you skin it, the “Stockade” will be useful. Its use multiple. The scope it adds to your location and any other published site-location, deep. Not in the “adventure” the authors packaged with the module. But the use you can put to the rooms and NPCs included.

And this isn’t “fixing” a module. Fixing a module is something else. This is leveraging the module. Surely this is what the early creators intended for their modules. They are heard to lament gamers mostly missing this point early in the hobby. But bills must be paid and if you don’t give a DM and PCs a “Story” to follow they are just so much deers in the headlights. “Why do I give a shit about slaver’s?” No one really knows what to do with this. But everyone knows what to do with a slaver’s stockade when they are in the middle of an insane underground acid city and what you need to survive, nay, triumph, is located there… that is another kettle of fish. Simple turn of perspective, but one I’ve never seen to fail me.

Courtney Campbell of Hack & Slash blog fame is offering ad space in his new Megadungeon 4 release. Vanishing Tower Press is sending this in; 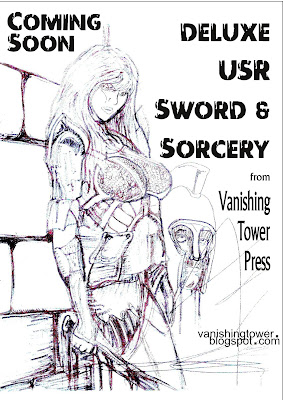 Hire Daniel Hernandez Fantasy Line Art before your Competition does....

I was still fishing around for another artist to do commissioned work for the ever-in-progress Deluxe USR Sword & Sorcery and I reached out to Drowsy Maggie, an old friend in San Diego. She turned me onto the Gor books back when we wore flowers in our hair. Perhaps she could help.

Drowsy Maggie put me in contact with Daniel Hernandez (makestuffsd@gmail.com), a Sand Diego artist and my hail-mary struck gold. I should keep close wraps on him until my book is out, but that would be criminal knowing my vanity press production schedule. He deserves more paying work sooner than that! 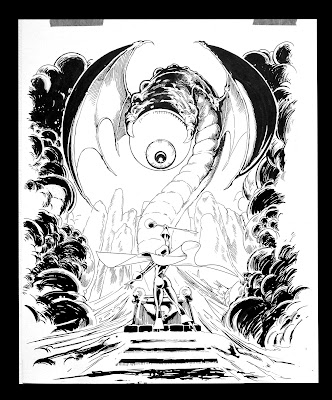 Most of his line art for the book is individual combat (go figure) and it is gorgeous. But he did do one featuring the Sorcerer's bread and butter - The Summoning Ritual! It isn't finished, but I think the quality of his line art shine through. Put him to work before someone else does.

State of the Dome - CTU review and invitation

Aeolus led Arachne, Aiako and Alcestis off into the dark, leaving Ariadne to guide the settlement…

The disparate adventures run in my Shattered Worlds OTU (Original Traveller Universe) make for satisfying world-building which has led to the delights of this seldom-run campaign. 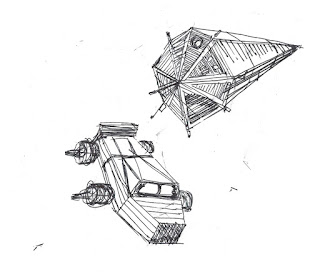 This first adventure had the most continuous sessions. Shattered Worlds Issue #1 engaged a seasoned crew of Traveller Players faced with a strange anomaly on the surface of the planet Xxcarvis. The LotFP adventure Monolith from Beyond Time and Space was used for the Anomaly. They got spooked out and only one of the four-man crew survived to return to Skalvil. These events unfolding on Xxcarvis are the meta-event which will blow through the campaign universe. This was all done through a G+ group which sadly is no more. Another unknown campaign disappearing into the ether. The one surviving PC from this adventure most likely will not play again, but their actions are now canon!

The next adventure Under the Dome Issue #1 had a police strike against terrorists who commandeered a corporate research facility. This lasted two sessions with more questions than answers, but the PCs were free to go in whatever direction they wished. And it lead to bloodshed and frame-ups!

Under the Dome Part Deux has the contract workers splitting up from the cop PCs after the terrorist job. The hired hands PCs are going to a Union bar to collect on a payout. The Union offers the party good money for any heavy firepower they could swing the worker’s confab. The PCs take a pass. Next Omni Cop HQ sends them to ask the Binary Dogs a few questions. This is a set up to get the PCs in a deadly gun-fight with this drug-running gang. The PCs come out on top and hole up in a nondescript pumped hotel cube. And there this story thread hangs hoping to be picked up again.

Under the Dome #3 introduced a new group of PCs, the third now, picking up work “under the dome”. Pretty straight job. Omni-Sun employee owes gambling money. The bookie is a “skin job” so it has a hard time getting respect from its human customers. It wants to step up pressure and become a bookie to be feared if you welsh. The PCs chew up the low-life ladder right up to getting arrested. It was an excellent place for this quirky escapade to come to a stop. Unfortunately it will be unlikely this group, Player Group C, will ever assemble again. No session report or video

Under the Dome #4 reintroduced a regular PC with some newbies. Another noir-like, uncover information, investigation type session as the PCs move through NPCs and locations. It ends in off-road buggy chases and a shoot out. Pretty cool.

What will Under the Dome #5 turn up? Who knows. But with a fleshed out sub-sector and big and little things happening all around; there is not much adventure-thirsty PCs can’t get up in to. If you want to know when these impromptu online sessions, these “Flash Sessions”, join either the MeWe or Discord (or both) groups.