I don’t know if Traveller’s combat system is considered “deadly”, but it has carried an air of complexity around it by those who have never played. I’ve had the pleasure of running six-seven sessions of Classic Traveller and I find the combat system amazingly plain, but with oft overlooked features which make it really sing!

Look at the combat turn order, nothing there any regular rpg’er hasn’t seen. The surprise mechanic is simple, and interesting. To hit is 8 or better on 2D6, and wounds are applied to your Physical attributes; Strength, Dexterity and Endurance. Range is simplified and the list of actions a character can take is boiled down into 4 actual combat actions. So where does this notion of an opaque, killer combat system for Traveller come from?

The reason Traveller combat is considered deadly and/or complex is because of at least two rules never used by regular players and referees. Rules so important it changes the whole relationship of the PCs to the game universe. They are the rule on weapon skills and the use of endurance attribute in melee.

The weapons skill rules are the most significant. Ranged combat takes on a completely different dimension when not used properly. The lack of this rule makes PCs less competent and easier to kill. On page 36 of the LBB’s is the entry Untrained Weapon Usage. “Any character using a weapon in which he or she has no training is subject to a penalty of 5 when attacking and +3 when def[i]nding (defending). While you let that sink in check out the next few sentences; “All player-characters automatically have an expertise of zero (0) in all weapons shown in this book.”

Not only does the average NPC have a 5 to their ranged weapon attack, the average PC suffers no disadvantage. A minus five swing in Traveller is a BIG deal. It makes most NPC’s the players interact with are “mooks”, adversaries which they can brush aside quickly. Add in proper use of cover and the surprise mechanics, any experienced combatants run effectively will roll gangbangers, grumpy miners, thugish dock workers, enraged bureaucrat; the PCs are designed to be Bruce Willis in Die Hard. A cut above the rest of the folks trapped in the tower. This is where you get to swing from the cable with auto rifles blasting the poorly paid and trained security guards! In a flat-footed straight out draw a PC should be Clint Eastwood to every one of those “lucky” punks out there.

My test was a poll on the Mewe Classic Traveller group and it looked like this: 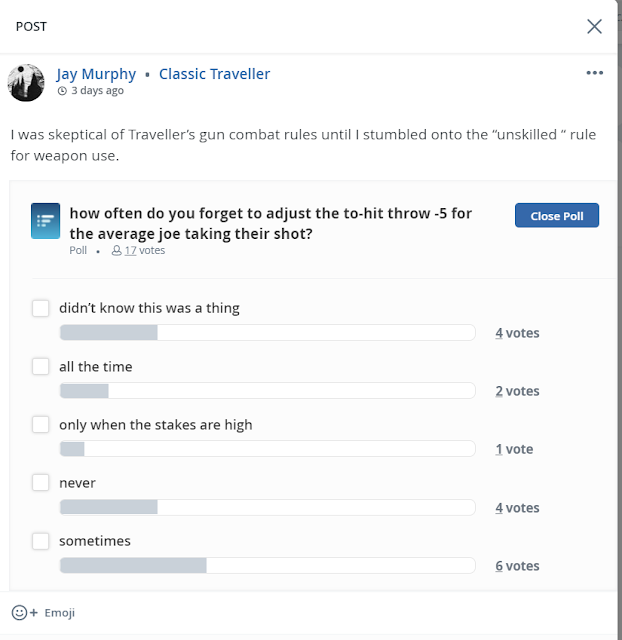 Your average Traveller player and referee doesn’t play with these rules at all. This is what I mean about swinging the combat game against the PCs. They are playing the game with one arm literally tied behind their back. Unlike weapon speed in AD&D, the -5 for untrained weapon usage is an essential mechanic for the Traveller game. Remove it and the way players play Traveller significantly changes. Further, this small sampling shows most referees and players have never considered this rule and its effect on combat.

Myself, I’m stingy with zero level weapon skills for NPCs. The weapon is deadly enough. Anyone can squeeze a trigger. But who can keep their heads about them when multiple people are firing guns, at short range no less?! Pandemonium is what happens. A character trained to be cool and deliberate during fire brings your game to movie-level action. Like in Heat, and Den of Thieves. The tattooed, ipod-wearing street hood goes down in a street fight with one spray from the trained PC.

In conclusion, there are some assumptions placed on Classic Traveller which change game play away from superior PCs, and therefore the game is going to be played differently. If you implement RAW I believe you will find players enjoying the game more.

It is a tight little work and is available in PDF form for $3.99. 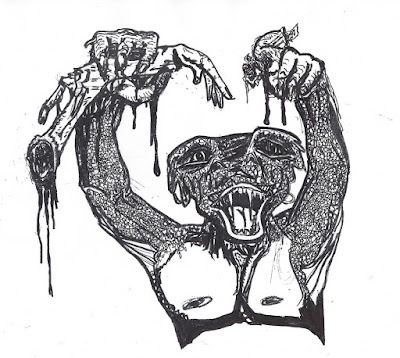 wounded in the forest. They have just crawled out from their failed mission within the “Hole”. A trio of fanged-mouthed humanoids killed their party before they escaped with their life. Robid has sworn to destroy this forgotten shrine of evil. Will the PCs help?

The POD version and the PDF with internal links is most likely two weeks out. I could have the book go through another round of layout. I may for the POD version.

But for those who want to put this adventure into play now use PayPal to send payment. I'm at jay@vanishingtowerpress.com! It is 40 pages, includes original art from myself and others, has had editing work done to it, an Appendix and a full monster "manual" of all creatures used.

Keyed dungeon map and a "dungeon ecology" breakdown to help the DM run the dangers fully.

Feedback is encouraged. The PDF is also on DriveThruRPG if you can't wait for me to get home and email your copy, but I do take the hit on OBS's commission. 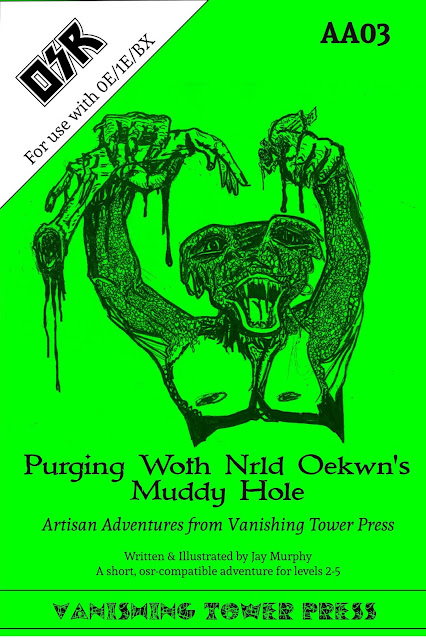