Okay, there is a review of this FGU module here. 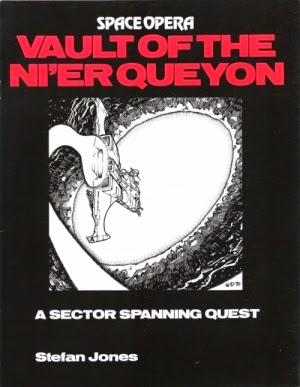 Quite surprised, as I am only pulling out a review of this dated module because it has sat on my shelf since it was printed in 1982, and once again I am vainly trying to find some useful material from its thin pages. No, that's not true. I'm dragging this old school product out so I can vent. I want to vent a bit on some of the garbage which was put on the store shelves when I was scraping milk money together so as to buy material which would give my friends a good game.

Here is my main beef; the module encourages the Star Master to waste the PC's time as much as possible. That they should be taken along a dangerous, fruitless trek across the galaxy pursuing a red herring. Then once the mistake is discovered, turn around and begin another long and dangerous trek across the galaxy and hope they are right this time.

I feel this kind of direction just frustrated my young, budding gamemastering experience. That this type of tutelage was leading me down a similar path of red herrings and fruitless encounters. Tricking my players and giving them nothing for their efforts. Granted I never got to run this module as the Space Opera rules were so difficult for me that we barely made it through character creation and a spacer brawl before it was back to D&D. I had better luck with Champions with my group cause I was a serious student of the medium and who doesn't like throwing Buicks and garbage trucks at each other.

I don't want to completely trash Stefan Jones' efforts. I think I get what he was after, a quest into an intriguing mystery which takes PC's deeper into the history of the game universe with the promise of a lucrative payoff in the end. But there is no evident compelling reason why the PC's should continue burning tremendous resources in the search.

The encounter of the old man pursued by thugs in an alley I can do. While not ripping original, it seems like the good stuff adventure seeds are manufactured from; that being the characters are free to chose how they want to approach the situation presented. Are they noble and wish to follow an honorable path, to seek deeper truths, to defend the value of knowledge? Or are they interested in being black hearted scoundrels worse than the current adversaries involved, only out for financial gain? But the clues which are to be gained from the book I found incomprehensible. I get that this first book is to lead to a second book which is to eventually lead to the secret vault, but the clues don't make any sense. Go ahead, read em out loud to an audience and tell me they get what you are talking about.

So than screw the narrative. You have a couple of ships stat'ed, two planets described and a some intriguing adventure locations. You should be able to do something with that. When  I purchased this module I did have a copy of the Space Opera rule book (which kicked my ass) and I still had a hard time deciphering how the illustrators keyed the deck plans of the ship. Is a deck plan key just too much to ask? Exploration of the first location, some ruins, will basically leave the PC's coming up empty. Trying to get to the ruins is the more interesting part of the adventure considering the details provided. But the ruins themselves are quite lackluster. Clues to continue come from garbage left behind by a previous adventure party. You could make a more interesting story line by making your PC's garbage collectors in a galactic city coming across a winning lottery ticket and trying to figure out how to cash it without looking like thieves.

The end point of the adventure is the treasure vault itself and it is not much. Bill Willingham's illustrations on these pages are actually the strongest feature of the entire module. The module should have been just about the vault. A detailed, mysterious, imaginative treasure vault filled with art collected by an unknown forerunner race is a cool idea. It begs the question, what would this species consider art? How would future species be able to recognize it for what it is? What importance would artistic taste and creativity from 150,000 years ago have to the current game world, what impact would it have? These are the nuggets that this module promised, but just never even came close to delivering on.

Why did I buy it? Cause I hoped a produced module for the game rules I just bought would help me decipher how best to deliver a great sci-fi rpg campaign. I trusted that Jeff Dee and Bill Willingham as artists on the project meant it was good stuff.

The name of the module is really the best part.
Posted by Jay Murphy at 3/11/2015 No comments: