... or how I was wrong about two great game products.

I chimed in to Bryce Lynch's review of England Upturn'd  and agreed with many of his points sited. Then I found myself returning to England Upturn'd again and again during my Clockwork & Cthulhu campaign. Not only that, but I mentioned in game I thought the Clockwork & Cthulhu sourcebook from Cakebread & Walton was "a bit thin" in game to my players. I need to reassess these two opinions in light of the milage I have gotten out of these products for my BRP Cthulhu &  Chivalry campaign. 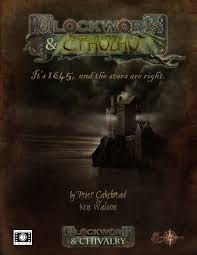 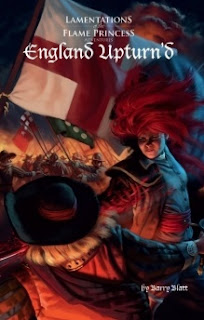 England Upturn'd by Barry Blatt is still an adventure I would not run whole cloth, but very rarely do I use an adventure as presented so this should not be taken as a knock. The module does provide information on the political divisions found within English society during the civil war. As a "Yank" I am not well versed in the scope and sweep of the English Civil War and I think most people running a period piece game will find the description of the different "sides" in this complex and consequential war useful. Barry puts in enough to run you initial adventure. After this if your game continues you will want to pick up some real history. No adventure is going to give you, nor should it, a comprehensive view of this conflict. I believe some of my initial frustration with England Upturn'd was mostly my perturbation realizing I had to do some of my own research to run my campaign to my satisfaction. But what these 128 pages gives you are useful disease and weather tables, laundry list of useful NPC's, plenty of plot hooks and enchanted items, useful locations and maps, and art which puts forth the absolute brutal nature of the times. As a PDF the value is met and exceeded.

Clockwork & Cthulhu, yes it only clocks in at 159 pages but there isn't a piece of this book I have not used. My first impression of the three scenarios was meh, but I have gotten so much milage out of just one of the scenarios it is kind of ridiculous. Same for the mythos, bestiary and factions chapter. When you have had to tape the book together and it becomes heavily tabbed and highlighted, well, I find this the operative definition of "utility".

At the end of the day these two publications have given my campaign game an essential framework which I and my players have been able to embellish with our own ideas and given us all a "believable" world in which to run around in burning warlocks and demons and such. So if you plan on running a sixteenth century English campaign I recommend these two books highly for the Game Master.
Posted by Jay Murphy at 10/28/2017 No comments:

Scheduled game of Clockwork & Cthulhu did not fire today so it was time for another edition of Yak n Ape with Anthropomorphic USR.

We started right where we stopped last time, with the PC's riding the subway out to the zoo. Willow, the candle maker they met on the subway, finally figured out the PC's were not human, but she stuck to her hippie values and offered to show them the way. The subway stop was a small station with few passengers and they were watching the late breaking Capitol City news. Some kind of explosion downtown, city wide blackout has occurred. Authorities are warning people to evacuate a specific area of Capitol Market, and the source of the explosion is unknown at this time.

The PC's quickly made themselves scarce and hurried down the night time streets of Royal Oaks to the zoo. They said goodbyes to Willow and scrambled onto the zoo grounds. They soon encountered the zoo's Big Game Vet Ava who was shocked to see her animals transformed so. She was sure Yak n Ape were two of the four animals stolen from her two weeks ago. The Yak exhibit was not so much being remodeled but the site of a crime scene investigation by Chrome and the Capitol City Police.

Ava takes blood and tries to push sedatives on them. She wants to knock the PC's out and call the authorities because she doesn't know what to do with talking walking genetically altered animals. The PC's are wise to such ploys so she eventually excuse herself and calls the cops. 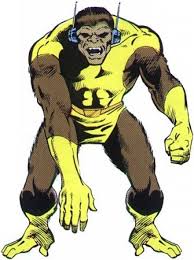 Here the PC's get up and try to leave. Outside near the front of the gate two SUV's pull in disgorging locked and loaded dudes complete with ear mic and tactical assault weapons. Not heeding orders to stop the black ops agents light up the PC's with fire. But instead of bullets they are cut down by tranquilizer darts. They come to back in the vet's lab, but this time securely tied down. The PC's are unable to pass a successful test of strength to break free. Special Agent Scott Roger Scott is talking to an anxious Ava as his men load the PC's on board a van. The PC's are put under again after brief questioning and come to in a different facility being faced with Special Agent Scott again. He wants to know what the two of them have to do with the explosion downtown. Seems he has a small nuclear core meltdown under the streets of Capitol City same time these two clowns start choking cops in the subway tunnels. The PC's say yeah they know all about it. Saw the whole thing happen. This gets Scott excited. He is going to take the PC's back into the underground lab and show him where the meltdown occurred. He plans to get concrete pumped onto the leaking nuclear pile after the scene of the explosion is examined. He wants the city street paved over and traffice running within twenty four hours. Official line is a neglected gas main ruptured causing terrible underground destruction. Fortunately no loss of life had occurred due to the blast, but there where fatalities caused by the ensuing blackout.

The PC's are forced to suit up and enter the lab. After going over the complex it is apparent most of the on site hardware is cooked. CHROME science agents collect all the samples and data they can from the scene before the concrete pumping commences. Finding the burnt out nuclear hole is not too difficult. With the radiation signal and black pit and all. Scott was radioing in where to send the pumping truck when horrible tentacles reached out and attacked. A seething toxic genetic monstrosity, five tentacled in all, gropes for the ceiling above ripping stone and concrete in its slavering madness. Fifteen feet across with a gaping maw, it first grabs Yak but is unable to hang on. Yak sweeps the room with autofire after using his terrible powers of the mind to acquire the gun, but does not know how to operate a gun at all. CHROME agents have better luck and rip up the monster. Angered by the blinding poo of Ape the monster grabs Ape from the wall and swallows him whole. The Ape fights back and forces the beast to put back what it had just ate. A final blast from the agents and the beast lay dead.

The team was ordered to wrap it up and head back to CHROME HQ here in Capitol City. With the nuclear waste being buried it was time for Scott to try and get answers out of Yak n Ape and what he is actually looking at. The operation or perhaps the facility is referred to as “Central”. What it is and what it wants are two questoins Scott wants answers to. For their corporation he could promise safety to the PC's, safety from those who altered them. The PC's were skeptical about any offers of safety on their behalf and wanted to know if they could make a phone call. Scott agreed and Yak called Willow the hippie candle maker down to Chrome offices and corroborate his story. She was kind of shocked to hear from him, actually Yak was shocked I wanted to role play this, but yes I did so Willow would try and get down there during her lunch break. Here I called it because I did not know what should happen next. Feel free to offer suggestions which way the campaign should go. I like to offer various avenues players can choose from. Scott wants to run down Central, he has the PC's so starting a hunt for their target would be in order. Maybe that is enough for initial adventure material?

Back in 2014 I was ruminating over my love affair with Blade Runner and the fact my love of my life doesn't like it at all. "Eighties movies just look so dated." she said after making her watch it. Well I didn't ruminate much. I just dropped the conversation and posted an essay I read on the film just to make sure I could say "I know what's real."

And watching Blade Runner 2049 this evening I was vindicated. Look I like smart people challenging me, sharpen my game, but I close down when you start talking like my dad or you throw shade on Blade Runner. "So what got you into Blade Runner in the first place?" she asked me three hours later after I gave the love of my life three to four outs on passing this three hour evening commitment. "I watched it." I replied. "It hit all the big notes of sci fi in film that never gets done." I said. There are other great sci fi movies. I love Close Encounters, Star Wars, Silent Running, etc. but Blade Runner are movies which treat me like I can get subtle storytelling. 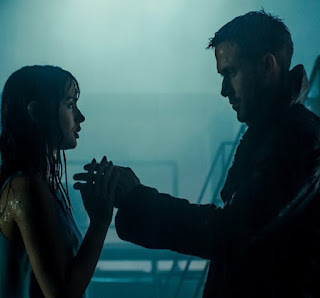 Most Hollywood fare tells you how you need to think and feel about the work. Like a Pepsi ad here is your prefabbed experience. What I like about the original, and now it's sequel, is it is a major film that lets me run with the story and make a bunch of shit up that makes it "real" to me. Much like how a good TTRPG goes. Everyone has their own wild imagination going on at the table, none is more real than the other. Mutual respect. That is what I got when I was fourteen and what I got tonight.

I am pleased with the sequel because it has a ripping soundtrack, characters I know nothing about stand out deep and present against the backdrop of a life without meaning, and not much is explained, thank you. Just good literary thoughts painted on a canvas immediately relatable to me where I am and keeping me fascinated. The Blade Runner movies make me a better game master, nuff said.
Posted by Jay Murphy at 10/14/2017 2 comments: