Sophie Brandt gave an accurate review of my POD genre hack of Scott Malthouse's nifty little rules lite game USR. Fast Paced Action With USR Sword & Sorcery hits the good, the bad, and the ugly of my game as it currently is. If you like Sword & Sorcery games this review will help you decide whether my rules hack is worth your next cup of coffee to try out your fantastic pulp adventures on! 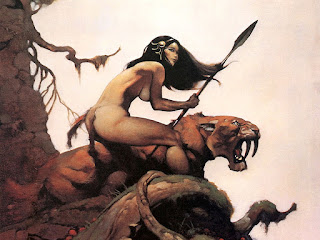 I am currently working on Horrors Material & Magic Malignant since like last year to fill in the gaps Sophie and other reviewers have noted, and, well too bad I have a day job cause this writing stuff takes time.
Posted by Jay Murphy at 2/21/2017 No comments:

Since I'm dithering on completing my POD USR Sword & Sorcery supplement Horrors Material and Magic Malignant I made a push to finish another USR project which has been sitting on the shelf for a while. 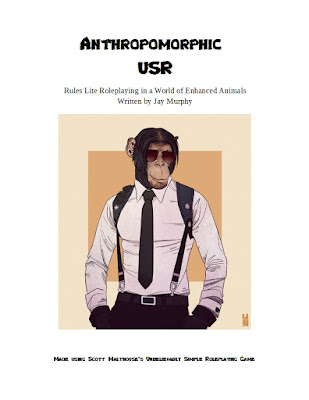 Anthropomorphic USR is now available and posted for sale on RPGNow/DriveThruRPG. A 24 page PDF it contains character creation tables, simple rules for making far out equipment and vehicle combat, plus it includes an introductory adventure.

A perfect rules lite tool kit to leverage your old comic book collection or all those old Palladium books you have collecting dust on the shelf. Like all of my USR products they work best with source material you want to use without a crunchy rules system attached. Streamline play and get into the action fast with Anthropomorphic USR.

BRP versus Savage Worlds Combat, a look at Minions

Someone  by the online handle of "pansophy" created a short pdf file offering rules for managing minions in your Basic Roleplaying Game. I downloaded and saved this file, looks like June of 2012, for future use.

While putting these rules in action depends on the genre being played, what I truly enjoyed about the article was the comparison of BRP combat mechanics to Savage Worlds. I was taking a look at as many different game systems in 2012 because I was just getting back into gaming. I was dead set on making sure my campaigns were going to have the "right" system for the game. By right I mean I didn't want the rules to get in the way of having a great time at the table and restricting unfettered imagination during campaign creation/prep.

I post the link above for anyone similarly on the fence and doing system research into the difference between BRP and Savage World combat mechanics.