Surprisingly, to me, given the sheer amount of threads started by folks on this topic, I never see much reference to the source material of the genre being suggested as something essential. I mean being steeped in the genre being run. Not just a cursory read of a few books or watching a couple of movies. I mean a deep dive as if one were taking a course study in college. 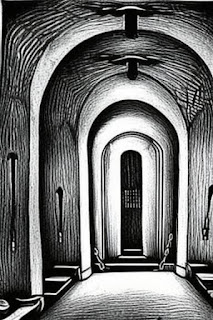 To be an effective, to be a "good", "great" Dungeon Master, Game Master, Keeper, Star Master and what not, you need to be extremely versed in the genre being run. If you are planning on running a supers game you should be reading comic books all the time. If you have never read comic books much you should go back in time and work your way back up to the present. The grand sweep of the comic tradition should be a topic you can nimbly navigate, process and use at the table. Many folks today seem to be asking how to run a cyberpunk game. Much product is being suggested as the platform of use, but rarely is their an insistence on the asking individual to read a fuck-ton of cyberpunk novels. I would even go so far as recommending extensive reading of the latest technology publications available to the laymen drafting out the latest developments in technology. Climate crisis, political efforts of social constructs, and corporate bloat, basically a master of current events with a bedrock knowledge of cyberpunk literature since William Gibson jump-started the genre. The catalogue of horror literature is incredibly vast. How many Keepers are knowledgeable of Mary Shelly's masterpiece, all of Lovecraft's work into your King and Barker? The horror Game Master also has the task of diving into the incredibly vast library of horror films.

Why? Why would one need to become a scholar of a particular genre to be a good Game Master? It is the underpinning, scaffold, colossal structure supporting every decision the game's referee will make at the table. Creating your mind into a rolodex of genre tropes transcends mechanics and system 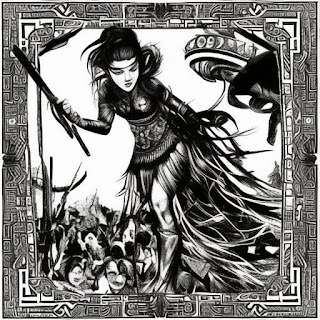 in such a degree to almost make game of choice irrelevant. When a Game Master becomes pitch-perfect in breadth and scope of genre, when what they speak has absolute fidelity with the genre being run experiences such as "immersion" and "living world" are a matter of course, not something all at the table are struggling to achieve.  Only through extensive reading of source material will a Game Master ever hope to achieve greatness. The benefits of scholarly-level pursuits in the genre being run are so transformative it will take much more than this simple blog post has time to dive into (or more accurately, my time). I, for one, have too much reading on my plate to attend to this task. But my direct experience has shown the more knowledgeable of a genre and its tropes I have the better the game and the better my skill at running. My mind becomes a tea kettle constantly steaming at high heat, always needing additional water to be added. The experience becomes... scalding.

The benefits of being a studied master of the genre blow all other considerations being debated on the subject away. Random encounter tables write themselves, adventure ideas come unbidden, thorny knots of character interaction become organic growth under good sun and good soil.

Posted by Jay Murphy at 12/25/2022 No comments:
Email ThisBlogThis!Share to TwitterShare to FacebookShare to Pinterest
Labels: DM Thoughts

The game has been chugging along for a solid two years now with no signs of slowing down! The current roster of superheroes inhabiting Capitol City are Mettle, a master of magnetic control, Olympian, Kordarian of tremendous strength, Mr. Zozo, a demon inhabiting a human host, and Perperbog, an Inuit Shaman of mystic might. 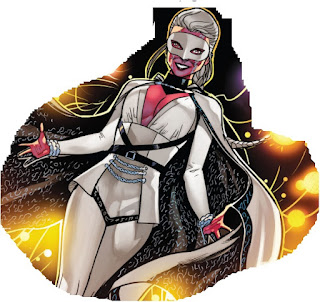 Posted by Jay Murphy at 12/24/2022 No comments:
Email ThisBlogThis!Share to TwitterShare to FacebookShare to Pinterest
Labels: Blood of Heroes, MEGS 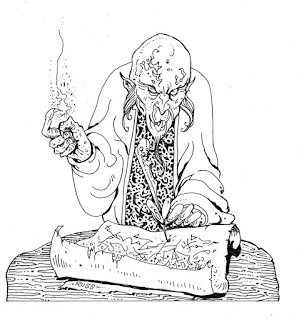 With some judicious holiday hours off I decided to actually run a game of Deluxe USR Sword & Sorcery instead of laboring on the third and final book of the trilogy. I offered up the introductory adventure from the setting guide (the third book), Shrine of the Keepers. A venerable adventure I wrote back in 2012 for the first playtest of this game. Wow, USR Sword & Sorcery has a first edition!

I was much pleased to get many enthusiastic answers and interest to the game session. After I sorted out the time slot, I ended up with 4 rogues. A goodly number, for the pulpy nature of classic sword and sorcery does not lend itself to large parties of dungeon delvers. The roll call consisted of Hackon Rinson-Hunter, Nosarat-Hunter, Patty-Warrior, and Votwin-Sailor. The adventure was to begin in Zul-Bazzir in the world of Xoth and two of the players rolled for nation of origin. This came up as Khora, the Island of Sea Reavers, and Khazastan, the might empire across the great desert east of Zul-Bazzir. The other two I just declared they were locals of Khazastani and Jairan heritage. Character creation was done at the “table” for USR Sword & Sorcery is a rules-lite system and creating a character is dead simple. Gear, on the other hand is a pricey proposition. Armor and fine weapons are well out of reach for a starting character in the world of Xoth. The wealth disparity between the rich and powerful and everyone else is vast. This meant, outside of some favored weapons I granted the Warrior and Sailor, the group possessed no armor. I take that back, Hackon was able to purchase a shield to complement his sling and club.

The set up for Shrine of the Keepers is one of simple robbery. It is late night, and the group is finishing up hours of carousing and look to settle their tab. Unfortunately, whatever silver they had left on their person was gone. I slinking thief twirling their coin pouches good be seen slipping through the rowdy crowd and exiting the wine bar. A swift pursuit began as the players leapt after the thief, all the while the wine tender hollering for his payment. They chased the fleet-footed scoundrel through the warren of alleyways in the slums of Zul-Bazzir. They lost sight of the thief and as they wondered which way to continue the chase when a blood-curdling scream pierced the night now far away. Descending on the scene they were just in time to hear the death rattle of the thieving dog. His body was slashed and ravaged. Their coin purse gone. The crafty hunters searched the ground for tracks. The night was full of light from the twin moons of Xoth, and they could pick the tread of sandaled feet leading down an alley which ended in a walled courtyard. The single large door for the gate left slightly ajar. 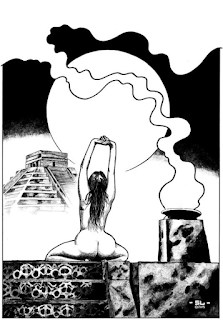 A passing city guard, drawn to the scene by the dying scream of the thief, quickly assessed the situation and cautioned the party to let go their loss. The open gate led to the temple of the Seekers. These demon-worshipping cultists were not to be trifled with. The Seekers keep what they take and only fools and madmen would risk causing their wrath. They predictably ignored the watchman’s sober advice (and it is a one-shot gaming session), and cautiously approached the open gate.

The courtyard beyond was illuminated by the moonlight and the hunters again could see the tread of sandaled crossing the dusty ground to the entrance of the Shrine of the Keepers. A wide stone building unadorned. Black smoke issued forth from somewhere out of the roof. In the middle of the temple’s simple facade a wide set of steps led into the building fronted by three wide pillars evenly spaced across the entranceway. They slinked up the steps into a wide unlit chamber. The slanting rays of the twin moons revealed large bronze doors directly across from the staired entry. Open archways gaped to the left and right, one had the flickering of torchlight coming from it. The other, darkness. All was quiet and no further tracks could be discerned indicating which way the group of cultists had travelled.

While they debated which course of action they should take, their brief exploration of the entrance chamber revealed a door to the left of the mammoth pair of bronze portals, discreetly hidden behind a tapestry writ large with obscene images and runes of dreaded black speech. The group globed onto this hidden door and desired to pass through it. It was locked, but the sailor worked one of his arrows (he carried a bow) and rolled well enough on his non-contested attribute roll (NCAR) to spring the latch.

Their exploration of the hallway beyond found them abruptly entering a bald priest’s quarters, the owner present. They had interrupted the robed priest in the middle of scratching his meaningless ramblings upon parchment. He quickly leapt from his chair and brandished a dagger gauging the danger in which had come upon him. Hackon boldly charged with raised club. The priest, considering his odds poor, ran to another door close by, opened it looking to escape. Votwin had his bow at the ready and made a called shot against the priest’s legs. His shot was a success, the damage great, and the priest fell to the floor incapacitated. The rest of the party followed, and before Hackon could fast-talk information from the wounded man, was stabbed repeatedly through the chest and killed.

The group made a thorough search of the main level of the temple, encountering four priests loitering in a room of tall shelves stacked with scrolls (they were dispatched in close hand to hand fighting), a sunken chamber filled with granite sarcophagi, a room heated to a blast furnace by a coal-fueled fireplace burning a pile of human bones, and a room with a large, lurid stone idol adorned with candles holding a bronze platter with a decent pile of gold and silver coins upon it. Besides doorways leading out of this room a narrow set of stone stairs descended to a lower level.

The group had no stomach for the lower reaches of the shrine, but they had yet to gain significant loot to leave. They continued their search of the upper level until they found the chambers of the high priest. There they were confronted by 4 priests and 2armed temple guards. Here they experienced the benefits of armor as the priests were cut down by quick thrusts and Votwin’s rain of arrows. But the 2 guards presented a hardier challenge and before they were hacked down, they grievously injured Hackon and Nosorat. Facing no further opposition they then looted the high-priest’s chamber of valuables and quickly left with their loot into the late night streets of Zul-Bazzir sleeping under the twin moons of Xoth once again. 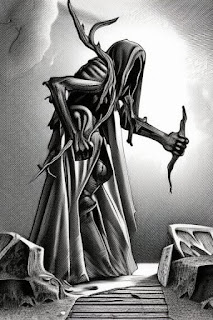 Even Heroes Bleed Continues To Rock and Roll

This latest episode of the MEGS powered super hero game I've been running. The group of heroes has bulked out to four now. Mettle, Olympian, Mr. Zozo, and now introducing the Arctic Shaman Perperbog!

Even Heroes Bleed Issue #37 part one 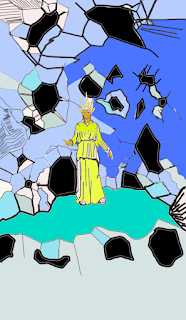