[EDIT] Corrected the embed settings so the video plays from the blog post.

Enjoying the ability to live-stream my regular game and I'm finding a replay of the session a boon to memory and campaign consistency. This is only the second session recorded, but I've already received fruits from our labors. Specifically in today's session the players found themselves at odds with each other and it was great to go back to the "tape" and figure out where the group cohesion fell apart and the PC's went at each other's throats. So that goes down two thirds in of this nigh on three hour session, about 1:50:00 mark. This is really interesting to me as a referee. For the players it all seemed the frustration with each other was mounting as no easy answer, no easy out, was forthcoming. When another player retorted they didn't trust the other player either I wanted to hold up a placard stating "Roleplaying gold being mined here!" This was awesome sauce.


Playing the session back I got a chance to see the arguments, opinions and stratagems used by the PC's to try and resolve the situation. One of the PC's used influence on NPC's (rather successfully) to try and prevent bloodshed. Another PC wanted to try influence on a fellow PC. Here I said no, no. Between PC's you need to not really on rolls to work things out you have to, you know, role play it. And by no means has the issue been resolved. The repercussions and outcomes from everyone's actions will linger until next game session! Aaand the players didn't take any course of action I anticipated so I was painfully scrambling to put together adventure material as they zigged against my zag. Not to give any spoilers here for my players, but I had an awesome referee moment when I said to myself, "Fuck it, this is where the game is heading!" so I strapped in let the trans-arcana clock tick ever closer to midnight, because this is the OSR baby. We did it all wrong it was so right; split party, threatening and violancing on each other's PC's, the pleading, arguing and fuming. A great way to enjoy morning coffee and get more mileage out of my game material. The game literally runs itself when the PC's are all doing the talking.

100 Reasons Why the Characters are Together & What is in their pockets?

I've created a separate page for all these buttons and random generators. It is here on this blog. The link is on the right. This page will continue to grow as I add more and more random generators.
Posted by Jay Murphy at 10/18/2018 No comments:
Email ThisBlogThis!Share to TwitterShare to FacebookShare to Pinterest
Labels: Random Generators

Posted by Jay Murphy at 10/18/2018 No comments:
Email ThisBlogThis!Share to TwitterShare to FacebookShare to Pinterest
Labels: Random Generators

Where my current players are there is a chance of running into "colorful" NPC's. One such category ending up on the "Random Encounter" tables I scratched together is Traveling Sorcerer! 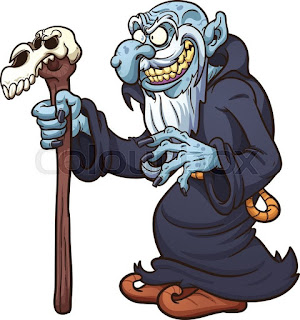 I turned to D. Vincent Baker's The Seclusium of Orphone of the Three Visions to detail this encounter listing.

I copied some of the random tables from this LotFP product and pasted them into the Last Gasp online generator tool. Just like that I now have, if encountered, a means of creating helpful and caring random strangers for my players to interact with!