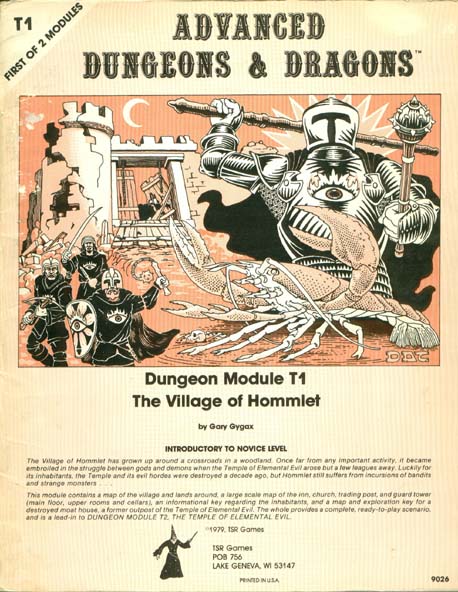 Other bloggers have taken an interest in revisiting this 1979 gaming classic and prompted me to adapted this module to suit my imagined dark fantasy campaign.

Reading the other blog posts has me appreciating more and more Gary Gygax's advice to freely adapt modules for your personal game. For example, in Patric Halter's post Moathouse Operational he comments on the difficulty, stat-wise, of this introductory adventure. Taken as a whole the module contains a wealth of stats, is stat deep. The miserable little village is spelled out in excruciating detail, and yes, the evil cultists which inhabit the moat house are a formidable bunch for a small group of beginning dungeon delvers to defeat.

That is if you assume the whole rotten lot can fight as a well trained, highly organized combat team. I don't see a cohesive, tightly drilled combat team inhabiting these grounds.


I imagine a squad of deranged men driven insane by the horrors in which they live.

For example, the bandits posted above ground seem to have to spend most of their time holed up in the tower with Giant Frogs inhabiting the moat and a giant lizard, snake, and spider sporting lairs in the ruins just outside their door. Once the sun sets it gets even better; shambling ghouls craving flesh roam about the swampy grounds along with the more active beasts described above. I don't see how this batch of guards could be anything but insane after enduring such nightmarish conditions day in and day out.

My point is, the "human" adversaries at the old ruined moat house would be under incredible strain, in my opinion, from the putrid rot summoned forth by their diabolical masters and I would have their combat effectiveness reflect this in game play.

In town, paranoia and superstition run loose through empty streets. The townspeople shut themselves behind their door for fear of the shadows at night. The church, the druids, and the town mage are all designed to be in collision course with each other and the outside threat to their town. Enter into this teetering goatscrew comes the player party.

Their coming should cause a tipping point which tilts the table and sets all npc parties into action. What these actions are, or could be, is not defined. Here the GM would need to give all the usual suspects their own agenda, and a plan they intend to follow. Here is where I would try and establish the conflicting relationships of the npc's, and carry them out.

For my dark fantasy campaign, if the player characters decide to pursue adventure opportunities in this part of the sand box, it is quite simple: The evil priest is commanding the ghouls to extend the catacombs beneath the moat house all the way to town. He has been extending them to the graveyard, abandoned wells, forgotten cellars, etc. When reached he plans on unleashing the undead hordes upon the village in a night terror of destruction. The priest of St. Cuthbert, and the town mage conspire to keep the true nature of the danger the town is in from the everyday citizens. They are in denial of the presence of dark evil closing in, and will attempt to silence any who would believe otherwise. The druids look for stout hearts to give them aid. The work on the new castle is slow, delayed. The foundations keep foundering in unstable ground. Sink holes appear in what should be stable ground.

Per Gary's command you are to utilized this adventure module, and any module you pick up, to help create the larger sand box you want for your characters to play. And the Village of Hommlet gives you plenty of "factions" in which to play off fantastic relationships in a heroic world.
Posted by Jay Murphy at 1/19/2013