Trying to get a pickup game going this afternoon and someone suggested Toon! Needed to be played. Now I must confess I never played a game of Toon! When it came out in 1984. I did see it flopped out at my high school gaming table and I remember reading the rulebook. At 68 pages that was light for a rule book in the mid-eighties. 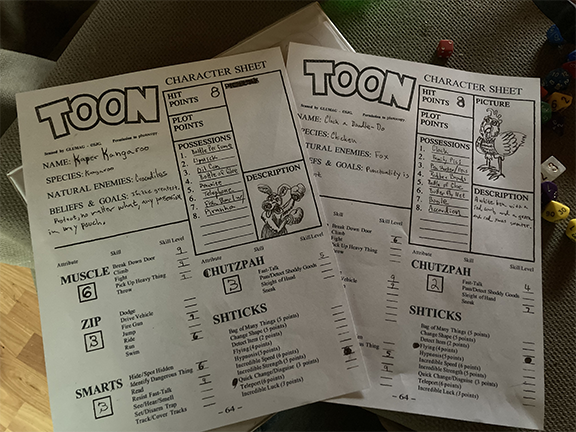 So, seeing as a game of something didn’t look like it would get off the ground this afternoon, I decided to roll up a pair of Toon characters.  I used random rolls and got Kasper Kangaroo and Clock-a-Doodle the Time-Sensitive Chicken. Kasper wears boxing trunks, believes she is the best boxer of all time and is extremely possessive of anything she has in her pouch. Clock-a-Doodle believes being on time is very important and wears an alarm clock around his neck and a Christmas sweater for clothes. I have thirty points to spread around a character’s skills and this is a simple process.

Now thumbing through the actual rules on how to do things I come across an introductory adventure, the Cartoon Olympics. Some solo roleplaying in order, perhaps? Why not, it is only Toon, this cannot be too complicated (side note, the slim rulebook comes with this adventure and four additional. That is five adventures in one game book of a very short page count. Sure, they are short, but that is in genre. So my hats off to Greg Kostikyan for going the extra mile and giving the new player something to play with. More rule books should include five adventures in their pages.

Let the Cartoon Olympics begin! Our first contest of the games is a boxing match. How fortunate for Kasper. She packs one powerful kick and is a natural in boxing gloves. Poor Clock-a-Doodle had a woefully inadequate Fight skill but has a very high Dodge skill. This could turn into a bit of a running circle. Obviously, the object of the first contest is to knock the other player out.

The ref is an old blind mole, and she is responsible for firing a starting gun at the beginning of each contest. But this is a boxing match, you ring a bell. The adventure calls for the blind mole to randomly shoot, accidentally, at one of the PCs when they pull the trigger of the starting gun. Now this is a big, exaggerated, cumbersome revolver and the old thing can barely raise the pistol. The ring side announcer yells for her to stop. You are supposed to ring the bell for a boxing match, not shoot the gun. Blind grandma mole can’t hear either, apparently. Mole shoots at Kasper who blows her Dodge roll. The bullet ricochets off Kasper’s head (causing 3 points of damage) and strikes the bell to start round 1.

Clock-a-Doodle takes advantage of the reeling Kasper and tries to talk her into lying down. “You just took a bullet to the head. Why don’t you just rest right down hear on the mat and get back your strength.” Clock-a-Doodle clucks. If he can get Kasper to lie down, he can win the match due to knock out! But Kasper is too cagey of a character.

“Wise cracking chicken, I’ll show you who needs a rest!” Kasper winds up and throws a haymaker. Clock-a-Doodle easily dodges and the bell rings concluding round one.

Round 2 begins with Kasper keeping a good eye on old blind grandma mole and sure enough she lets loose an errant shot to begin the round. Fortunately for the boxing cartoon animals her shot this time goes wildly amiss, eventually finding its way back to mole, knocking her out, then striking the bell to begin the round. Clock-a-Doodle yanks out from under his feathers a cracked Bic pen and with a mouth of sloppy spit wads fires a volley at Kasper. The chicken has no fighting ability so is going to have to win this fight at a distance. Kasper Kangaroo leaps and bobs around the shots and lands on her feet unscathed.

“Try and dodge this!” Kasper pulls out from her kangaroo pouch a stick of dynamite, lights it, and lobs it at Clock-a-Doodle. She figures it will be hard to dodge an area effect attack. She also neglects to figure she will probably be in the blast radius to.

With a terrified squawk Clock-a-Doodle flaps his wings and flies up above the ring and the lit stick of dynamite. “Not going to turn me into a six-piece McNugget.”

Kasper screams, “Disqualified. Besides not being able to wear boxing gloves, the damn chicken has left the ring. But her plea falls on deaf ears, literally. Grandma Mole still snoozes away, knocked out from her own gunshot. KABLAM. The dynamite goes off and Kasper takes another 3 points of damage. She only has 2 more. As for Clock-a-Doodle, he has so far come through the fight unscathed. This is starting to really work Kasper up. The round is concluded and the two cartoon animals return to their corners.

Both these characters took enemies at character creation, Clock-a-Doodle listed a fox and Kasper Kangaroo put down a crocodile. So these characters pop up as their respective trainers in their corner’s. The each get some respective fight advice which amounts to nothing more than oblique references and non-sequiturs.

As the third and final round begins both boxers plead with grandma mole to hold off with the starting gun. Their plea goes unheeded, the gun is fired, everyone ducks (including mole) the bell is struck and the round begins! Clock-a-Doodle looks at his watch. “Ah, right on time. Make way for the nine o’clock speedball express!” He pulls out a train whistle and gives a long blast. Grandma Mole lifts up the ropes to the boxing ring and lets a steam locomotive come barreling into the ring straight at Kasper Kangaroo.

This is when my Discord server starts binging and a couple of players have gotten together and want me to run another session of Classic Traveller in my Shattered Worlds campaign universe. Off to Vandars Dome, but before I go, I just want to give a nod to this nifty game from way back when. What is Toon good for? Besides a lighthearted break from any serious dark gaming you may be doing, the elastic nature of the cartoon universe will keep you on your toes improve-wise. Which is always a good skill to continue to develop in any of your games.

Posted by Jay Murphy at 5/21/2022
Email ThisBlogThis!Share to TwitterShare to FacebookShare to Pinterest
Labels: DM Thoughts