Mewe this morning sported this graphic; 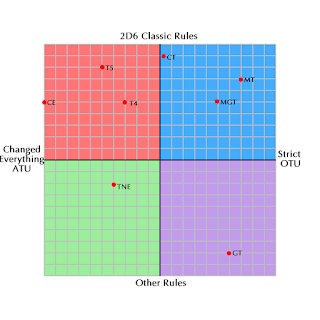 Here the poster wants you to pick on the graph your Traveller play lands. While the chart displays a side for the game company's created setting (OTU for Original Traveller Universe). Which is not exactly true because Traveller when first released came with no setting. Developers assumed Referees and players had their own ideas they would wish to play. How wrong the first opinions of the first RPG creators were! And you got to sell more product, so like every other game company out there, GDW sold people a pre-packaged universe.
On the left hand side of the graph is ATU (Alternate Traveller Universe). This refers to  a referee altering the Imperium setting to suit their needs. Not anything completely original though, just the basic acts a referee in any game is going to do when they get their hands on a published setting.
And there you have CT (Classic Traveller) straddling the line between the two. What the graph lacks is a place for how Traveller was originally intended to be used. It is amusing, to me, that this important fact/attitude/outlook was completely lost when the game was released to the world. And I'm no different. When I first looked at Traveller a long time ago I took it as a game designed for adventure play in the "official" setting, and therefore bypassed it altogether and went with FGU's Space Opera. This game at least stressed in the introduction that the rules should be used to create your own science fiction settings and worlds. Unfortunately Space Opera had a terribly organized and edited rule book so I was never able to get very far with it in high school.
It took a series of excellent blog posts, "Traveller out of the box" I think they are called which helped clarify what I was looking to do with my first attempts at science-fiction roleplay and how the original black books delivered, in spades!, for those intending to do something original.
And that is the way I ran with Traveller when I got an online sci-fi game going. So the graph lacks a position, a place for people playing the game as first envisioned by Marc Miller, the creator of the game.
Imperium-Adjacent the whole graph needs to be called. There is the official universe and then there are those who fiddle with the details. That is about it. So somewhere off the chart is where I live with the game. There is no space to pencil in "used as toolbox to build original games".
I turned to Dune, as I am wont to do when reflecting on the sci-fi (for game purposes, not reading pleasure) and what is my intent, goal with my game of sci-fi.

Take the Dune books. Ostensibly the original book (the only one that matters) takes place on one planet and in one city on the planet. The star-spanning cultures of the Dune universe are only inferred through the thoughts and actions of the characters. Neat trick I say. So Frank Herbert created a huge galactic society by not creating a whole huge galactic society...

It begs the question how much world-building should a referee do at the outset of a new campaign? And it seems not much. I appreciate the brutal nakedness of the first generation of roleplaying games. Here is a set of rules tilted towards an adventure genre so when you create your own classic vision of sci-fi, western, fantasy the rules will support the referee's efforts. The first part of the original rules for Traveller accommodate this game philosophy through character creation. The method is such a neat "trick" players and referee can begin a game with little prep and plop media res at opening scene. Something as simple as "You are in the starport bar when a stranger approaches you with a proposition." Now players are sure to start squawking for setting information; what bar, what planet, what system... What navy, army, scout service spawned my character?

I think the nimble referee looking to build a game universe around their player's characters is well rewarded by utilizing Classic Traveller rules. It is awesome if the referee has a crystal-clear idea on what the world setting will ultimately be about (Dune is a good example). Players get to "grow-up" with the game universe and learn about it like you would in real life, through experience. But if not, the game still supports the referee through all the important steps of adventure creation and campaigning. Without resorting to a pre-built universe to show you "how it is done."

In conclusion, Traveller was once able to assist you with whatever sci-fi subgenre tickles your fancy. Planetary Romance, Hard Science Military, galactic savants and sentient planets, telepathic whales and rabbit-holes of new discoveries. Demons, wormhole passages, dreamy natives living on top of the ruins of ancients. Its use was quickly blasted away under the understandable need for gamers to be given a starting point, an official universe and the understandable need for the company to sell what the majority of gamers want.

Long and short of it, I'm a relict of gamings past. The original design philosophy of the likes of Arneson and Miller leave me not wanting much more from the company outside of their genre specific rules. It is a concept I can lose hold of in the product push by game companies trying to pay the bills. Unfortunately for game companies fierce creatives will use their rules well, but not drop much on additional merch.