Stonewall's Last Battle: The Chancellorsville Campaign is the fifth volume in the Great Campaigns of the American Civil War Series by our venerable and defunct publisher, Avalon Hills. It is the only title of the GCotACW I own and is the only US Civil War game I own in toto. It is a genre I have been most desiring to play but never have. This game recreates "Fighting Joe" Hooker's bold flank march across the Rappahannock to the climactic battles around Chancellorsville. Included is a beautifully ren­dered game map of central Virginia which includes the Wilderness, Fredericksburg and practically the whole length of the Rapidan and Rappahannock Rivers. This highly accurate map is based on original Civil War maps in state and county archives. And the map links with the maps from the other 4 games! Yes, you can give yourself a theater 5x the size of what you start with.

I have had the game since 2004(?). Got it the same time as Columbia Games’ East Front and GMT’s The Battle for North Africa. Completing Scenario #1 last night and then rolling through 3 turns of Scenario #6 I now have solid opinions on this package of goods. These are all great games! 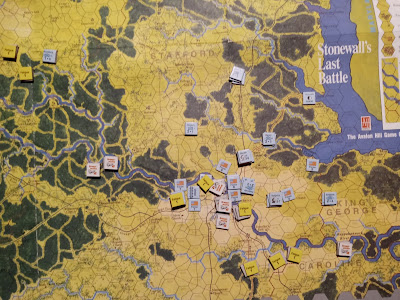 Stonewall’s Last Battle impressed me with the mechanical flow of the game. It tilted back and forth with an unpredictable initiative system. This means one side can move and attack with their units multiple time in a row. This feature is balanced by Fatigue. Every time a unit does something it increases its level of fatigue by 1. At 4 fatigue the unit is dead in the water. and must wait for the conclusion of the day-long turn and its concordant Recovery Phase before it can take action again.

and the game map is gorgeous. It makes the situation the commanders faced more accessible with a good-looking map and dynamic turn play. In short, it is a fun
game with a great package of features. My favorite feature is the amount of text given over to a detailed report of each day’s actions from the historical record. You can just set up the campaign scenario and see why Hooker and Lee would have made the decisions they did. Which was all dependent on the terrain faced. Which is excellently portrayed on the game map!

Good looking box. It is one of the more appealing spines on the shelf and makes you want to slide out the game and see the full cover art. The rules are laid out well. I highlighted key items over many readings and now the rules feel understood. This is all solo play and I had played the Salem Church scenario (#1) up to going through march and assault attacks with the forces. Maybe three times since 2005? I confirmed this with a fast play through of the scenario and moved right into the full game, Scenario #6 The Chancellorsville Campaign!

I have forgone the historical flank attack made by Hooker and made my Union crossing of the Rappahannock directly on either side of Fredericksburg and am going straight at Lee dug in south of the city. First two turns go quick. The Union basically gets two turns (two days) of maneuver north of the Rappahannock before he must place his bridging counters. Once the Unions have bridged the river the fighting starts, and my game is starting out no different. The Union can place 1 of the 2 bridging counters available. Jackson, in response to the attacks on the fords west of Fredericksburg, had moved up a full division east of the city, denying their planned crossing at this location with the pontoon bridge constructed for the task. 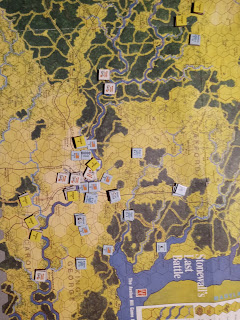 This makes the prosecution of the Union advance committed to a western crossing, but there are plenty of avenues to get the Army of the Potomac across and into the Confederate lines. Turn 3 is a grind. I have made a strong attack against Lee with 3 Corp attacking the breastworks of Fredericksburg from the west. In response Lee calls for his southern reserves to mobilize. These are the remaining elements of Jackson's Corp and the historical Confederate defensive strategy leaps at you. The Union is forced to expose its right flank attacking the Confederate position, and Lee has the Army of Northern Virginia’s reserves in just the right spot to pounce on this weakness as they approach Fredericksburg.

I play through several more turns. I crossed the river just east of Fredericksburg but Sickles/Sedgewick is not going to get farther than this. The rebels dug in are too strong behind their forts but not strong enough to dislodge three full divisions. Stalemate. This means going straight at the city from one side will only repeat what Burnside experienced, slaughter. His men were slaughtered in the frontal attack. He to tried to do an end around Lee, but the high waters and torrential rain drowned his second attempt in the mud of Virginia's roads and muddy tracks.

I'm too late to try this. My union forces were stalled on two separate times by high rivers and more rain and now the game is too far along to change course and achieve victory. So I think the simulation is well balanced. Makes me want to play more games from this series!