No secret, I love Unbelievably Simple Roleplaying by Scott Malthouse and Trollish Delver Games. I'm going to qualify this with a review of the system and why I use it.

Boiled down attribute list. A character's attributes are three in number. Why? Because you do not need any more than three to cover most any character's attribute numbers. There is Action, Wits and Ego. You could call them Strength, Smarts and Spirit. You could call them Physical Dexterity, Mental Dexterity and Personality Dexterity. You could call them Grit, Guts and Cool. You could use any number of descriptions any regular player would know and understand. I've played and run games with a shit-ton of attributes. Rolemaster, Champions, Space Opera, etc. And I find the long list of attributes in these games not needed. I get the point of having 8 to 15 attributes. It is to create "granularity", creating subtle differences in a character which can be exploited up or down to make the character "unique" and create a greater range of probability. 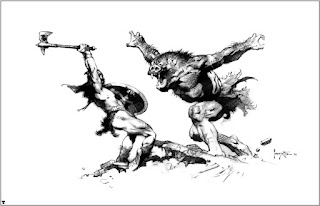 When I first looked at USR I was also exploring the semi-new hotness which was FATE and Savage Worlds. And when I held them up against USR I began to appreciate the thought which went into the die spread. Which is assigning one of the following three dice to the character's three attributes as mentioned above. The dice are a d6, d8, and d10. So a player has to make choices at the start of character creation; do you want the PC to be a stand out in physical action, or intelligent or very charismatic? The granularity sought in games with bucketloads of attributes is achieved by USR with varying the dice size. Rolling a d10 against a d6 has one degree of probability just like rolling a d8 against another d8 is another set of probabilities. Savage Worlds does the same thing with their character creation process, but USR does it in 3. A nice tight number you do not have to agonize overmuch.

Match this with a simple resolution mechanic able to create tension and uncertainty and you have a powerful little engine of could. USR has contested and non-contested "tests". These are bedrock resolution mechanics which have been with us since the creation of rpgs. You are usually, no matter what game you are playing, going against a set target number (really common) or rolling off against an antagonist (not as common). When working to repair a radio, for example, you use static target numbers. The not uncommon spread of easy, hard, impossible, etc. So USR has a Difficulty Table to set these metrics and combined with different die sizes you end up with increased (granular) probabilities. If you have a Wits of d6 and fixing the radio is a Difficulty of 6 then you have only 1 number you can roll to succeed. If your Wits are d10 you have a greater probability of success.

Contested rolls was a method of resolution I first encountered when I got into Chaosium's Stormbringer game, specifically combat. Percentile based so very easy to grasp. Two sword fighters go at it. One has an ability of 50% and the other has an ability of 80%. Clearly the character with the higher ability score is "better" and should win the contest. But one must roll. All the 50% has to do is score a good roll while the 80% rolls shit and you have tables turning. Tension, uncertainty, the meat-and-potatoes of rpgs.

The same is achieved with USR by rolling off and variety, tension is injected by dice size. Better chance of rolling higher than your opponent when you are rolling a d10 versus their d6. But it isn't guaranteed. Between these two methods, contested and non-contested, there isn't very many other ways rpgs resolve actions in the game. USR just does it in a very compact way while retaining a great deal of probability, of scale which isn't readily apparent on the surface. But I have used the system extensively and can vouch for its utility.

Character customization and abilities. So most games have you with a character built on attributes and then they have "special" abilities, or skills, or aspects, traits, whatever the hell you want to call them. Scott calls them Specialisms and a player gets to create 3 for their new character. It is left up to the player to pick and create their character's Specialisms but they all have one thing in common. They provide a +2 to any resolution roll which the player can justify adding. Have a Specialism in hand-to-hand combat? When you are in a fight add a +2 to your die roll. So you have a skill, this Specialism which to leverage rolls in your favor, contested or otherwise. Since it is up to the player to come up with them no one is tied down to a set "skill list" or package of "feats" or some such. Smart to use the principle of threes here again. Just enough for unique variety while also maddening tight so a player really needs to lean into their character concept to arrive at satisfying results.

And this is all fast. Creating a character takes ten minutes, tops. Resolving actions and complex situations are quickly derived because their isn't an exhaustive list of abilities, skills and modifiers which need to be waded through before the value is set and die are rolled for result.

And this is a universal system. A generic role playing game engine. I have used it for Sword & Sorcery, Westerns, Cyberpunk, talking animals and 70's sex politics and sports.

But there is a price to be paid with generic systems. Setting and character types need to be described and created. Or not. But the system is best used in the hands of an experienced Game Master with a great love for the genre being played. Being a fan of a genre means you should have a good catalogue of tropes which to embellish the new, generic game world with the necessary (an interesting) window dressing. Player's can be complete nubes, the game system is far from complex. Experienced players should be able to jump all over the character creation choices which are wide-open to create anything they want.

So why USR? It does everything the best of role playing games do and it does it in a very small package. Which is free. Call it fat-free.