A new player is joining the tribe and it seems appropriate to reflect on the last year of the campaign and how now it is about to change. 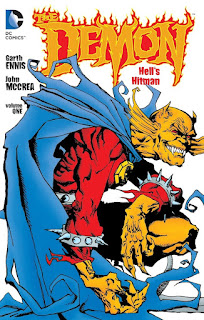 As I’ve mentioned before, the most affordable and complete text of Mayfair’s MEGS mechanics which make up the game engine is the retroclone from Pulsar Games, The Blood of Heroes Special Edition. DC Heroes 3rd Edition is really good, but I think The Blood of Heroes has all the optional rules ever made for the game beneath its covers.

Anyways, the superhero trio of Olympian, Bug, and Mettle returned from their trip to Belize with the subdued Dr. Good (now calling himself Doctor Draconis) in tow. They deposited the criminal scientist at FBEE headquarters and considered what their next priority is.

This is when Bug’s PC announced he could no longer make our game sessions, and a new player popped up. Big changes in one day!

Bug and Mettle (with assistance from Red Runner) can list shattering the biggest mobs and gangs in Capitol City and, for now, getting them to back off on the street violence, or else! The mystical EE Wotan who was leading the Civil Guard was also banished from our earthly plane. This banishment took the aid of the strange EE called Voodoo, who disappeared with the vanquished Wotan.

These victories did come at substantial cost. Innocent lives were destroyed, and the Baltimore was burned down. The blood toll was so high the young Red Runner hung up his suit and returned to civilian life.

Next, they took on sex-traffickers running out of an Indian reservation, exposed them and got them arrested. After much fighting and punching of faces.

Their next accomplishments were stemming the outbreak of drug-induced violence from the bizarre drug known as BAM! and uncovering the secret experimentation done by the US Government beneath the Pawnsville mine. This lead them on the trail of a criminal mastermind, Dr. Good, which as I have mentioned ended with Dr. Good’s capture.

The new player has a hero who is a person possessed by a demon. Imagine Etrigan from DC Comics and you are not far off the mark, as far as character concept goes. Mystical attacks and strength. Probably a good compliment, team wise. Mettle can manipulate metal and Olympian is a Superman-type heavy hitter. Eye beams, flight, etc. And now a demon who can cast magical spells and rip peoples limbs off. Works for Capitol City from where I'm sitting!

The List of Intriguing Loose Ends is long and subplots too specific to be of interest here in this blog. Here are the major ones I can think of.

The Cockroach Brotherhood, believed to be living in the sewers. Their actual origins are uncertain as well as their motivations. The heroes have been meaning to look for these weird EEs and find out what their deal is, but bigger issues seem to get in the way.

The Roadkill Wrecking Crew. This gang of EE’s has managed four successful high-tech robberies. Why and for what purpose is still unknown. One of their members, Croc, is currently in custody. 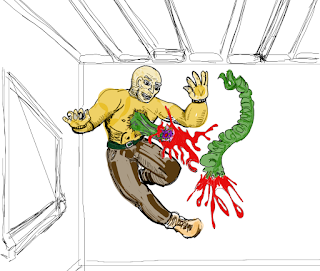 The Congress of Truth. A shadowy organization seeming to continue the work started by the government at Pawnsville. Seems their endgame is delivering utopia through world domination.

Capitol City Mayor. A dirty, racist, power-hungry white nationalist who is responsible for letting loose a serial arsonist on minority neighborhoods. He is making a killing off of subsequent real estate development deals on the burnt property and pays off the heroes each month, so they don’t come at him. But this impasse can only stand for so long before one side or the other makes a move. The Mayor is eager to reassert organized crime as the law of Capitol City, not those damn superheroes!

Deep Ghost, who, what, and where is this guy? Motives unknown. Controls and effects things through internet, cellular, any electronic communication really. Accessing and distributing information seems to be his chief interest. A blackmail expert?

List of criminals in custody due to the heroes actions are;