Recognizing Wargames as patient zero in what would become tabletop rpg’s and go on to infect the brains of millions of nerds breeding ground is usually brought up in the context of demonstrating how DnD is shit for roleplay. Besides the open abyss of vapidness which overtakes me when this discussion occurs. Mostly because it is soft talk around the fact maybe you suck at the game and the person juuust can’t get their head around that. Besides all this, it is the clear miss of most to consider wargames as devoid of roleplay. 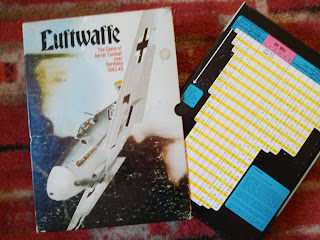 Wargames are historical simulations which get turned into games because optimizing routine behavior is hard-wired into humans. The historical simulation thrill of orchestrating sweeping military campaigns takes back seat in concern of the win. Aside from the obvious competitive urge which can get me to take my eye off of the wargame ball, which I call immersion. I want to see what it would be like to command armies and experience the decisions these commanders faced. If I have no connection to the historical context of the game, I end up playing a complicated game of checkers, looking to leverage all advantages in the system to score a “hit”. Even if I have a keen interest in the historical action depicted, I easily drift into a competitive mindset. I must beat the other person if I am to consider the game fulfilled. That is why I always end up playing the game two times, I’m sure.

But I also can get into the groove. I can tell the stories in my head of the sections and squadrons, what they did on that day. The flipped over chit on the hex map is now the smoldering pile of defeated men and machines. And it is happening on a certain day, a certain hour under certain weather conditions. I feel the wind in my face as I lean against the hatch, scanning the horizon for the enemy. Fuck, I can roleplay the shit out of my wargame. I didn’t call it that because I had never heard of ttrpg’s when I first started playing at Rommel in the Libyan desert.

And that is the wargame ball and it has been an immersive roleplay experience ever since Tactics hit the table for a shit-ton of people who enjoy this kind of thing. If you can ttrpg a wargame you can roleplay anything which comes after marketing itself as a ttrpg. Wargames don’t lack the role play experience; it just doesn't appeal to many people. It is mostly a solitary experience, that is the key difference. Once you start thinking how to make the experience a shared one with multiple people you will notice the nugget of gold which is buried in a wargame can be extracted and applied to other imaginary experiences. Not something better either, just different. I want to get my rocks off this way as well as that way.

DnD didn’t introduce ttrpg’s to the world, wargamers had already created this for themselves. Eventually someone participating would (and did) make the connection simulated fantasy play would have broad appeal. And they worked on it until they had what they were after. And they were right to do so.

Posted by Jay Murphy at 6/27/2022
Email ThisBlogThis!Share to TwitterShare to FacebookShare to Pinterest
Labels: DM Thoughts