I’ve plopped Napoléon, the venerable wargame Avalon Hill inherited from Columbia Games, onto the kitchen table intending to bull-rush my way through a solo game. The operational goals are to experience the entire game. The strategy to be employed to reach this goal is not dwell on rules too much. Begin with the sequence of play and grind out each turn as quickly as possible. The game is going to be friendly to this approach because of the limited components. Setting up the competing armies for play can be done briskly. The rules are delightfully brief and the movement system is very understandable. It only takes a few turns to move your armies around before you get the logic of the conflict space. 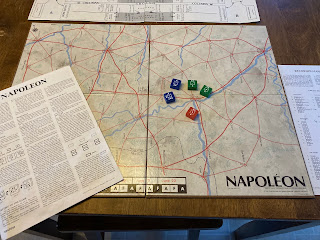 This means no dwelling on optimal placement of forces during set up. I’m going to trust the game will reveal how the forces should be organized in offense and defense as I move the armies into contact.
The victory conditions are on point, destroy your opponents army. Reduce your opponent and make them unable to resist.
Roads can handle only so many troops before it is closed for further movement for that player’s turn. The 2 types of roads are major and minor. River crossings cut this limit by half. Towns with multiple roads leading in and out of them become the key terrain feature to leverage tactically. Their radiating spokes allow mutual support of each other’s units, a key to success. You win the game by having substantial reinforcements to funnel into a battle while denying the defender the same. 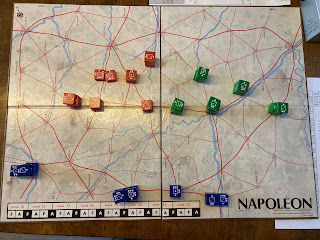 I open the French with movement on the eastern flank. Cavalry units with a small contingent of infantry and aritllery. The river is crossed just north of Givet across the Belgium frontier. 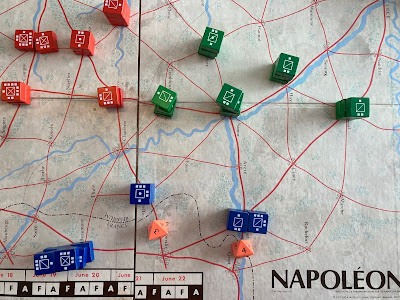 On the second day of hostilities Wellington reacts to the French provocation shifting cavalry and artillery in a blocking position at Namur. These forces are supported by more Prussian units which are close enough to reinforce any battle which may erupt here. Note the defensive use of the river. This restricts the amount of forces an attacking French army can bring to bear on the first battle turn and striking with overwhelming numbers in the first battle turn is a vital way to massacring your enemy and winning the game.

The French June 16 move is spent moving the forces in the center up to engage Ligny and Quatro Bras. Namur has too large of a troop concentration to attack so the attack will be directed at a weaker point in the center which does not include a water crossing. This was basically the intent of the French initial moves. The troops occupying Conde move in support of the center’s left flank and intends to harass the allies from Soignes. 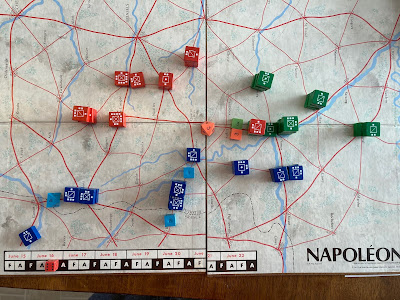 The Prussians coordinate with Wellington to set up a defense against Napoleon in the center. Napoleon moves up his forces on the left to Soignes. The French hope to pin down enough forces south of Waterloo in preparation for the main attack against Ligny. Noting the pressure Napoleon is flexing on his right flank the Allies are content to sit pat. Time is on their side and the French forces committed are not an alarming threat. Wellington sees the battle of consequence will be at Ligny. 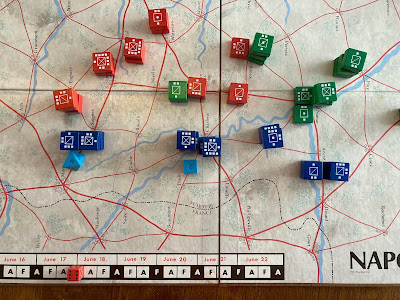 The dice placed on the table is my marker to track how many troop counters have marched down a particular road for the turn. Mastery of the game requires mastery of the road network and moving more troops into a battle than your opponent. Here is a picture of the movement and set up around Namur and Ligny. A French strike on either of these two towns would face Allied troops streaming in from three different directions! The French cavalry on the lower right 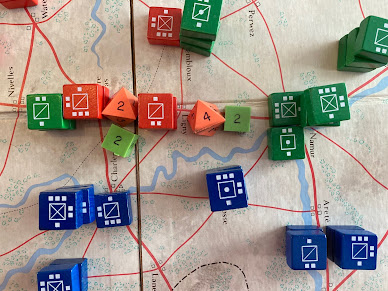 is positioned so to swing left and support an attack on Quatro Bras. Cavalry can move 2 towns compared to infantry and artillery at one town a turn. And forced march! Don't forget about forced march. It clearly is worth the chance of attrition loss in a forced march to get more troops into a key position before a battle erupts.

Currently the troops in front of Napoleon are more numerous and in better position so I decide to demonstrate on the Allies right. I attack Einghiem. 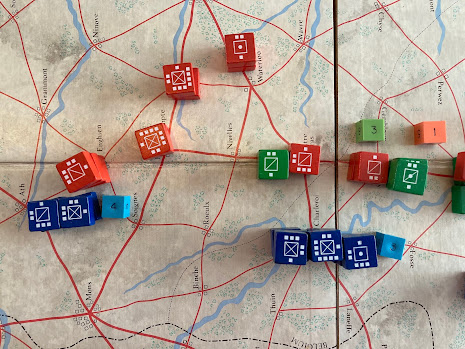 Four French units vs. three Allied units. The French consist of two infantry units, and two unit of cavalry. Allied forces are an infantry unit, cavalry and artillery. One of each here. The French will need to knock out the enemy on the first battle turn, otherwise Wellington can move two additional infantry units and tip the balance in their favor. Next post we will take the units off the game board and transfer them to the battlefield and I get to see how a set-piece battle is played in this game.